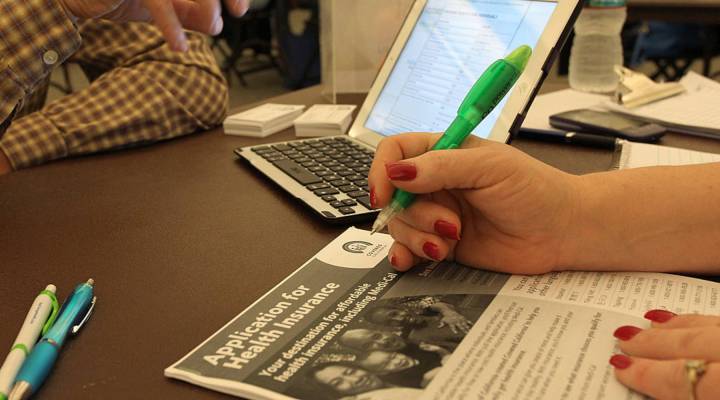 As the the newly revised Senate health care bill is floundering and Americans still have no clarity on what will happen to health care policy in the U.S., we check in with East Hannon, Connecticut resident Bradley Gawthrop. We last talked with Gawthrop, who at the time was working as a pipe organ builder in Johnson City, Tennessee, when the Affordable Care Act was still being argued over in court. Pipe organ building jobs are few and far in between, and Gawthrop is recently unemployed.

Marketplace host Kai Ryssdal called him to catch up. The following is an edited transcript of their conversation.

Bradley Gawthorp: It’s a rather small trade, but we are out there. You know, benefits are all over the place. This is essentially an arts job which means lots of uncertainty and all of the things that go along with that.

Kai Ryssdal: Yeah we had you on back, probably four or five years ago, talking about health care. And you said at one point, premiums are going to be more than your rent. And so you had to figure out a place to live and do without health insurance. What’s your situation been since then?

Gawthorp: Well back then I was an independent and so the usual amount of uncertainty was even further compounded. But that uncertainty finally culminated in the business imploding and so I went back into working for someone else. And since that time it got a little more reliable. I’ve had health insurance twice since I went back into full time employment and the first time it was more than we could carry financially and I ended up dropping it. And then we picked it up again in July of last year.

Ryssdal: And now again, you being unemployed, you’re going to have to find either a way to do it on the exchanges, for as long as they exist, or pay some kind of fine again?

Gawthorp: Yeah I got spanked by the IRS the last time this went around. And with the farcically names “shared responsibility payment,” I think is what they called it. I’ll be facing that situation again unless I can carry it. It’s pretty heavy. Without an employer paying part, it would be my second largest bill. It’s no longer quite as much as my rent but that has a lot to do with having moved someplace where housing is more expensive.

Ryssdal: How much was the fine? How big was the spanking as it were?

Gawthorp: The last time. Let’s see. I actually have that right here. 1,106 bucks for last year, and that’s for a partial year of not being covered.

Ryssdal: What are you going to do now though? With health care changes clearly on the way, if the Senate can figure out what it wants to do, what’s your plan?

Gawthorp: Well obviously some of it will depend on their plan and some of it will depend on whatever comes next for me for employment. So I’m in a position where the uncertainties outweigh the certainties. If the price stayed the same and I went back into some reasonably gainful full-time employment I would probably be able to keep it. But if either of those moves very much that’s probably not going to be realistic. I’m the kind of guy they want on the exchanges, right? I don’t smoke, I don’t drink. I’m young, I’m active. If this premium was continued for a whole year, we’d pay about $6,000 in insurance and we’d probably get out $1,000 in care.

Ryssdal: As you look now for employment, whether it’s going to be pipe organs or some other craft, how important is it to you to find someplace that has health care benefits?

Gawthorp: I’d like to see it. I mean until recently I worked in a shop where there’s always the possibility that one of the tools will decide to separate you from a finger. I suspect any sort of regular full-time employment is going to be able to do something for me in terms of helping out with the insurance, and that’s probably the biggest factor that would discourage me from going it alone again.