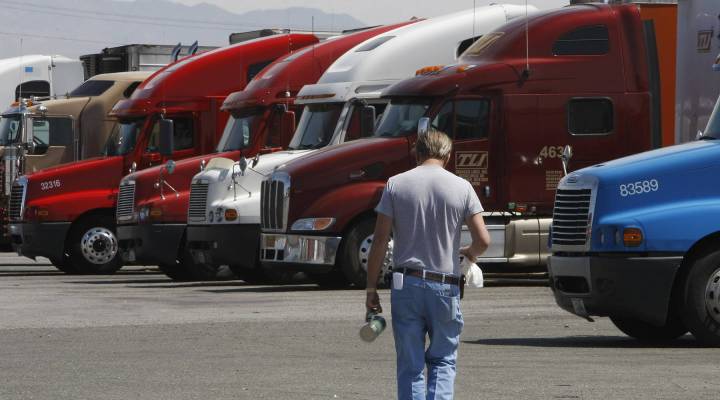 COPY
Attorney Hilary Rowen says the biggest driver of rising insurance rates is the sheer number of hours truckers and everyone else are spending on the road. ROBYN BECK/AFP/Getty Images

Attorney Hilary Rowen says the biggest driver of rising insurance rates is the sheer number of hours truckers and everyone else are spending on the road. ROBYN BECK/AFP/Getty Images
Listen Now

The commercial auto industry has taken a big hit lately — it lost more than $700 million last year on claims involving trucks and other commercial vehicles. Those losses are translating to higher premiums for businesses.

Hilary Rowen of law firm Sedgwick specializes in insurance and said with the economy booming again, driving is up. And truckers and van drivers log more hours than most.

“In the last few years, mileage has increased to record heights,” she said. “The more miles cars travel, the more accidents they have, all other things being equal.”

But they’re not equal. Distracted driving, thanks to cell phone fiddling at the wheel, plays a big part in accidents today. Road deaths and injuries shot up in 2016. Trucking firms have been targeted in lawsuits. And commercial insurers have been flooded with claims. Rowen said insurers “are paying out 108 cents for every dollar of premium they take in.”

As a result, they’re raising premiums or dropping coverage altogether.

Chad McGee, a claims advocate at risk management company Pritchard & Jerden, said to keep premiums down, more trucking firms are turning to technology to monitor driver behavior — cameras that are triggered by things like speeding or braking sharply.

“Once where it was just large trucking companies using these technologies to curb accidents, it’s now moving down to small and middle market businesses as well,” he said.

He added that drivers themselves don’t always welcome the move.

“They feel like Big Brother’s watching, their employer doesn’t trust them, this is invasive.” Still, McGee said, when technology proves they’re not at fault in an accident, they’re converted.

Veteran trucker Monte Weiderhold is still keeping his distance from these systems.

He owns a small fleet in Ohio and has been driving for almost 40 years. He and his drivers haul steel. He’s had to switch insurers recently and said his rate has gone up a little. He said it’s experienced drivers who help keep accidents and premiums down. His insurance firm has always insisted on at least two years’ experience.

“Everybody I’ve ever hired has probably had a minimum of five or six years experience,” he said. “You know, they’ve already been through a lot of the situations on the road.”

Attorney Rowen agrees good training and experience help. But she said the biggest driver of rising insurance rates is the sheer number of hours truckers and everyone else are spending on the road. And that, she said, would be “baked in, until we have the next recession.”