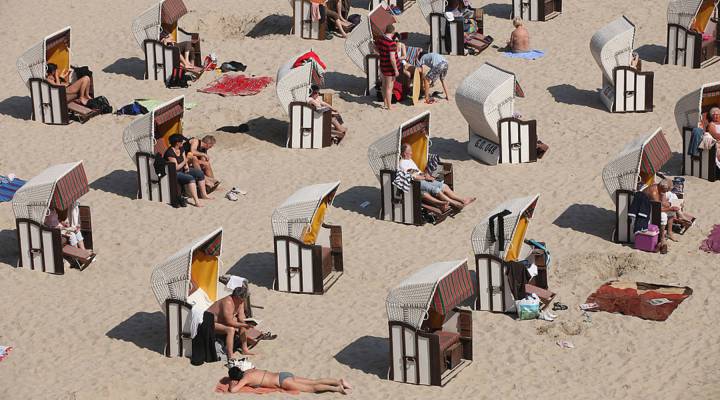 COPY
“The No. 1 reason actually why people don't take vacation days is that they're worried about the mountain of work that they're going to come back to,” says Nathan Lump, Travel and Leisure's editor-in-chief. Sean Gallup/Getty Images

“The No. 1 reason actually why people don't take vacation days is that they're worried about the mountain of work that they're going to come back to,” says Nathan Lump, Travel and Leisure's editor-in-chief. Sean Gallup/Getty Images
Listen Now

About half of workers in the U.S. didn’t use all of their vacation days last year. 2016 saw 662 million available days left on the table. Travel and Leisure magazine wants to change that with a special issue that features travel deals and tips to get more Americans to take some time off. They’re calling it “Operation Vacation.” Nathan Lump, Travel and Leisure’s editor in chief, is heading up the special project, and he talked with Marketplace host Kai Ryssdal about why taking vacations matters. The following is an edited transcript of their conversation.

Kai Ryssdal: Why is it a bad thing if people don’t take vacation? I mean what’s the problem?

Nathan Lump: You know, I think that when people don’t take their time off, they don’t have any mental space basically to get away from both the stress but also the demands of the office. There’s plenty of research out there that suggests that that’s actually not good for people’s productivity. It’s not good for their creativity. There’s also a really big economic impact to this. The Project Time Off research says that, you know, there’s as much as a $236 billion economic impact of people not taking this time because also when people take time off they tend to spend money. So it’s actually a good mover for the economy. If people took even just one more day a year than they do, the people who leave unused days on the table, that’s $33 billion in the economy.

Lump: The No. 1 reason actually why people don’t take vacation days is that they’re worried about the mountain of work that they’re going to come back to.

Lump: So they do care about reputation but what’s happening is that people feel like they have so much work to do that’s going to be undone while they’re away that it diminishes their enjoyment of the time off. And we think that there’s a lot of work to be done in terms of creating workplace culture that makes it OK for people because when you ask managers what they feel about this they will say that they think that ultimately their employees come back more refreshed and more productive when they take time off. So why aren’t we talking about this as something that’s beneficial?

Ryssdal: We are by far the outlier globally in not taking vacation, right? I mean we don’t take vacation more than any other country on the planet probably.

Lump: So that’s not quite true.

Lump: The Asian countries, particularly South Korea and Japan, are similar to us. So according to some research that I’ve seen that Expedia does, actually the South Koreans are one of the worst. They take about eight of 15 days a year. And I think what’s a little bit different about Americans is that we get fewer days than anyone else. So the fact that we then also only take maybe half of them is particularly telling and particularly poor.

Ryssdal: When was the last time you took a vacation?

Lump: Me! Well, I take vacations all the time. Although it’s a little bit hard to —

Ryssdal: Says the guy who works at Travel and Leisure.

Lump: Yeah. I can’t describe them as vacations entirely because I’m always a little bit working but I am lucky that I get to go all over the world all the time I’m out of the office a lot. And you know I tend to do a lot of blending, what some folks will call “bleisure” travel, where I’m doing some business but also taking some time for myself.

Ryssdal: What about this thing actually, “bleisure” or whatever, I don’t even know what that word is, right? What about people who go away but they’re still on e-mail?

Lump: Yeah. I mean definitely a lot of folks are staying connected. Personally I don’t think that has to be a problem. I stay connected even when I take vacation. What I try to do is concentrate my time. So say you know what I’m going to do is take 30 minutes or 60 minutes in the morning and then I’m going to disconnect during the day and that allows me to enjoy that time. Thinking about that mountain of work that people are scared about coming back to, I think that can make it better.