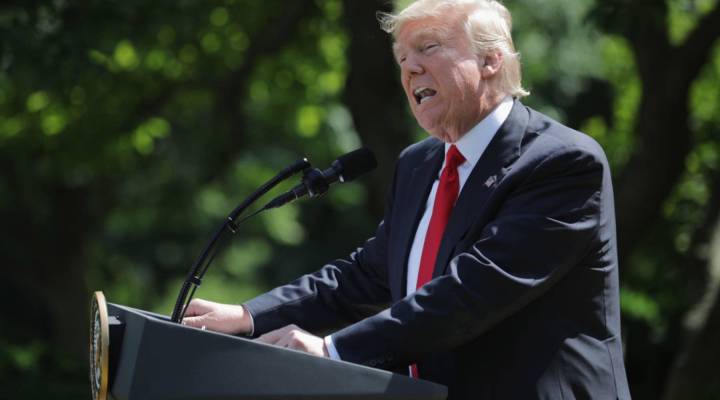 COPY
President Donald Trump announces his decision to pull the United States out of the Paris climate agreement in the Rose Garden at the White House June 1, 2017 in Washington, DC. Chip Somodevilla/Getty Images

President Donald Trump announces his decision to pull the United States out of the Paris climate agreement in the Rose Garden at the White House June 1, 2017 in Washington, DC. Chip Somodevilla/Getty Images
Listen Now

It’s been a busy week when it comes to presidential lawsuits. The attorneys general of Maryland and Washington, D.C., are suing President Trump, alleging that his business interests leave him “deeply enmeshed” with foreign and domestic governments, violating the emolument clause in the Constitution. Congressional Democrats also took aim at the president with a similar suit.

Much has been written about the emolument clause, which says that the president can’t profit from foreign governments (you can catch up on your reading here). But we got to wondering, when the administration is tied up in court, how does any other work get done in the White House?

Andy Wright, who worked as White House counsel during the Clinton and Obama administrations, said that when the president gets sued, things can get complicated quickly. When he left the White House after the Clinton administration, it was with 13 binders holding over a thousand subpoenas — a reminder of the volume of work he did.

Wright said that there are key points to keep in mind when people who work in the White House are involved in lawsuits, and it’s important to handle them correctly — not just for the sake of the administration, but for the American people.

1. Compartmentalize. Wright said that no matter how much litigation is aimed at the White House, as many people as possible should still be doing their day jobs. For lawyers and communication staff, handling a suit (or multiple suits) can be time consuming, and other projects might be put on the back burner. Wright said that creating a team that is single-handedly dealing with litigation is crucial so that the rest of the White House can operate as usual.

3. Don’t get swamped. Wright said that members of the Clinton administration felt as if they lost years of policymaking to Clinton’s impeachment trial. As much as possible, the president and those working in the White House should be continuing to pursue the goals they set out to pursue, leaving the courtroom drama in the courtroom.