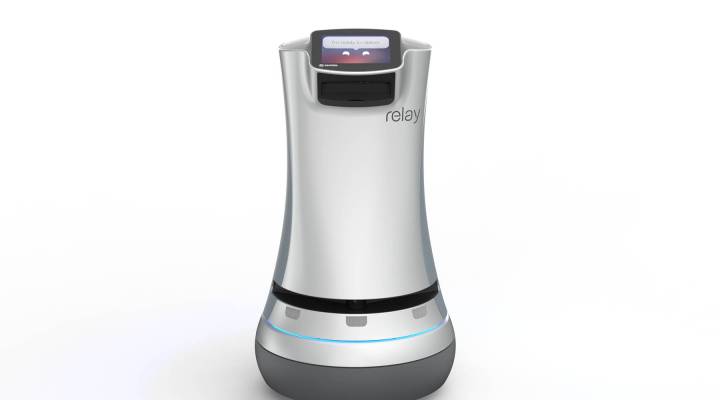 When the doors to Chicago’s Hotel EMC2 opened this past Wednesday, Leo and Cleo were ready to get to work. Decked out in their coattails, their name tags proudly on display, the two newest additions to the team have created quite a stir — both among the staff and the guests. You see, Leo and Cleo are not your typical hotel employees. They are about 3 feet tall and they can work around the clock.

Hospitality robots, it turns out, are here. And they are kind of cute.

Leo, a delivery robot by Savioke.

“In fact, unlike some other robots like C3PO, which are humanoid and kind of creepy, Relay is cute and he talks to you and beeps and boops,” she told Marketplace Tech at this year’s Collision conference.

Leo and Cleo are actually part of the staff. They can fulfill guests’ requests and deliver items such as tooth brushes, extra towels, water and other room service items to the guests.

“When we got started, we were looking at all the different markets where a delivery robot would make sense,” explained Lau. “And hospitality makes a lot of sense, because A) there are a lot of hotels out there and B) they need to move stuff around. Anytime people live or sleep in a place, they need things. They need food, they need bedding, they need extra stuff to live there and so Relay is great at ferrying all that stuff around inside of hotels.”

Hotel EMC2, which is a Marriott hotel, is not the first one to use Relay. Certain Aloft hotels in California, Texas and New York are also been using Relay robots for room service deliveries. Aloft and Hotel EMC2 are part of the same hotel family since Marriott bought Starwood, Aloft’s parent company, in 2016.

So far Savioke has produced 100 Relay robots and has more than 50 contracts in the works to install them in hotels. A Relay robots can be rented for about $2,000 a month with a 3-year contract that includes maintenance, Lau told Fast Company last year.

Despite the warnings about robots replacing workers in the news, Lau insisted that the Relay at your hotel door is not stealing a job of a potential hotel employee. Rather, its purpose is to make people’s jobs easier, allowing hotel staff to focus on other tasks while the robots make deliveries.

Besides hotels, Relays have also been dispatches to places like FedEx and Kinkos. Seven Relays have been hard at work at a FedEx facility in Tennessee, where they make deliveries inside its repair facility.

“Relay can bring technicians parts to repair small electronic devices without them having to get up and go to the parts depot and retrieve the parts on their own,” explained Lau.

Back in Chicago, Leo and Cleo seemed to have been welcomed by their human coworkers. While Leo posed for photos in the lobby, front desk staff looked on in delight. The two robots have been a “very welcomed addition to the team,” according to Christine Wechter, the general manager of Hotel EMC2.

“Besides making your jobs easier, they make you happy. After they complete delivery, they ask you to rate them and if you give them five stars, it makes a little noise and does a little twist,” said Wechter, mimicking the movement. “It’s a cute little thing that it does. It’s different and it’s not meant  to take anyone’s job. We have to fill it. We have to call it. And we don’t want the robot to take anybody’s job. We want it to enhance the experience and give the experience that’s different than you’d get at another hotel.”

Similarly to FedEx, EMC2 staff can also use Leo and Cleo to delivered extra supplies to housekeeping staff working on different floors.

“The robots can be called and we can send up the thing they need to finish what they are doing,” said Wechter. “It helps keep them productive and not waiting for something.”

To overcome any potential robot-bias, Savioke upped the cuteness factor. It seems to work — at least in case of Leo who elicited a round of “awwws” from the hotel staff as he did his signature “thank you” dance twist in the lobby.

“A lot of people are resistant to change,” said Lau. “Change can be very hard to accommodate and so one of the things we did with the design of Relay was deliberately make him cute. That’s his survival strategy. We want people to love him. We want people to adopt him and to embrace him and to bring him into their lives.”