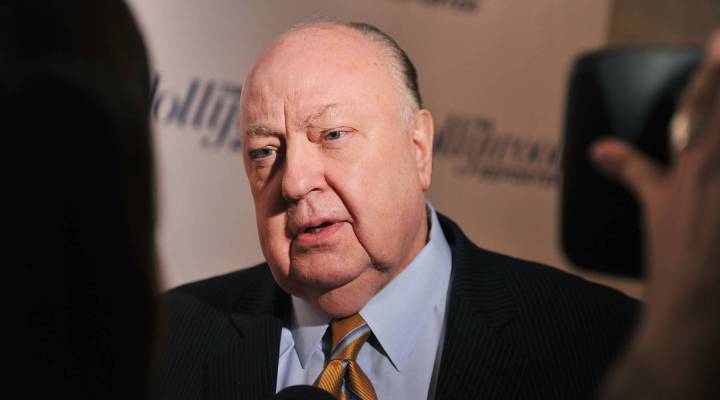 Roger Ailes, the founder and former CEO of Fox News, died today. He was 77.

Ailes was, per more than a dozen women who’ve come forward, a serial sexual harasser and enabler of it in his company. But he was also a man who changed the United States.

Host Kai Ryssdal talked with Gabriel Sherman, national affairs editor at New York Magazine and the author of “The Loudest Voice in the Room: How the Brilliant, Bombastic Roger Ailes Built Fox News — and Divided a Country.” An edited transcript of their conversation follows.

Gabriel Sherman: Agree, wholeheartedly. You know, Roger Ailes did more than any person of his generation to transform American politics into a contact sport. He coarsened the culture, he mainstreamed conspiracy theories and he paved the ground for the election of Donald Trump, who harnessed all of those currents that Roger Ailes unleashed on the country over the last 40 years.

Ryssdal: Part of his business genius was that he put stuff on the air that was just flat cheaper, right? Opinion and commentary is cheaper than actual reported journalism.

Sherman: Without question. I mean, this was again one of Ailes’ unique insights. There was a famous saying inside Fox News when Ailes launched the network in 1996 – “People don’t want to be informed, they want to feel informed.” So, what Ailes did is he adopted all the trappings of a news network — the anchor desk, the sets, the studios. But he basically shed all the actual functions of journalism, which are bureaus, reporters out in the fields, expensive things like that. And so you have two people in the studio commenting on the news, and the audience at home doesn’t necessarily feel that they’re actually getting anything less. So that was one of his unique business insights. It was  just a cheaper product to make, and the profit margins on Fox are reflective of that. It generates more than a billion dollars a year for Twenty-First Century Fox, the parent company.

Ryssdal: Before I came into the studio to talk to you, I went back and I listened to our interview when your book came out, and two things stuck in my mind. One was that you said Roger Ailes was a man of extraordinary charisma but also who managed that place, who ran Fox News with an iron fist and managed by fear.

Sherman: Yes, and I think the scandals of the last year and the flood of women who came forward to allege sexual harassment is a testament to that fear. You know, when I reported my book, I had heard stories of the sexual harassment, but just whispers. I had two women courageously go on the record to talk about Ailes’ unwanted sexual advances and the way he wielded his power to try to dominate women. But the full scale and scope did not become fully evident until Gretchen Carlson’s lawsuit broke the dam and the flood of allegations came forward. You know, we should point out, Ailes to his death denied those allegations. But the scope and the volume of the allegations paint a picture of a man who used his power to try to exert his will over women.

Ryssdal: And we should say those lawsuits continue even after his death, right?

Sherman: Federal prosecutors as we speak are subpoenaing documents and records to look at whether Ailes and Fox News broke laws in the way he ran Fox to serve his personal agenda. Also about the ways in which Ailes used Fox News’ budget to fund his private investigators and smear campaigns and potentially illegal surveillance of journalists.

Ryssdal: When you watch Fox news today, what do you see?

Sherman: I see a network casting about for an identity. I see a network chasing its audience. Roger Ailes’ brilliance, whatever you think of his politics, was that he knew what the Republican audience wanted before they did. In 2007, Roger Ailes identified and harnessed the forces that would become the Tea Party. He put Glenn Beck on the air, basically coinciding with Barack Obama’s first inauguration in 2009, and Glenn Beck’s audience exploded because that was where the country was at the moment. Now what I see is a network that is waiting for another visionary to come in who can give it an identity, and I don’t think it’s necessarily being made to become, you know, more mainstream, more liberal. But you need somebody who can harness all of the personalities on Fox and come up with a cohesive message. And they don’t have that right now.