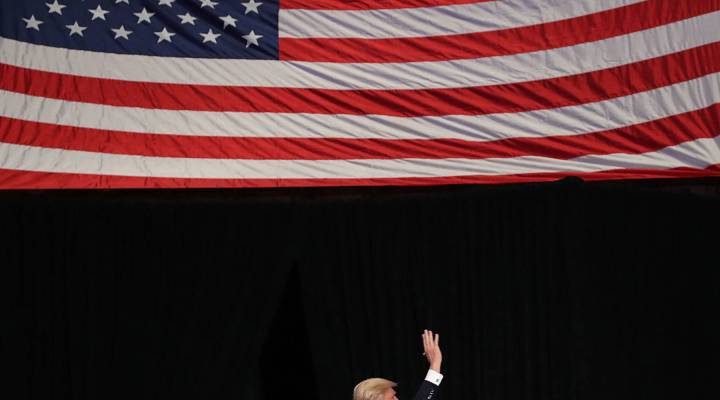 President-elect Donald Trump waves to the crowd while being introduced to speak to supporters at the Giant Center, December 15, 2016 in Hershey, Pennsylvania.  Mark Wilson/Getty Images
Economic Anxiety Index®

President-elect Donald Trump waves to the crowd while being introduced to speak to supporters at the Giant Center, December 15, 2016 in Hershey, Pennsylvania.  Mark Wilson/Getty Images

The countdown is almost over. Come Saturday, President Trump will have been in office for 100 days.

The 45th president arrived at the White House with quite a to-do list. Among the things he hoped to accomplish during the first 100 days in office were: tax reform, repealing and replacing Obamacare, investing in infrastructure and ending illegal immigration. None of these have been checked off yet.

As his first three months in office come to a close, Trump’s approval numbers are coming in at historic lows. A new Marketplace-Edison Research Poll found that 51 percent of Americans disapprove of Trump’s handling of the economy, while 42.7 percent approve.

These numbers align with other polls released this week. A new Wall Street Journal-NBC News poll found that 54 percent Americans disapprove of Trump’s performance so far compared with 40 percent who approve. Another poll conducted for Washington Post-ABC News found that the president’s approval rating stands at 42 percent, compared to 53 percent disapproval.

“We found that the level of anxiety about health care is exceptionally high,” Larry Rosin, president of Edison Research, told us Monday morning. “A huge majority of people say they worry, at least sometimes, about health care — about it wrecking them financially, about being unable to find insurance or being able to pay for things. So of all the reasons that people have economic anxiety in the states, it turns out health care is probably the single-biggest driver. More so than even jobs.”

Trying to unsuccessfully tackle repeal and replacement of Obamacare early on in his presidency might have cost Trump his honeymoon period — the early period in office when U.S. presidents typically enjoy higher approval ratings. Out of the last dozen presidents, only Trump and President Gerald Ford saw their approval numbers come in below 50 percent, according to the Washington Post. President Barack Obama, on the other hand, enjoyed a 69 percent approval rating during his first 100 days in office, and President George W. Bush enjoyed a 63 percent approval rating.

President Trump took to Twitter on Monday to dispute the findings of the Washington Post-ABC and the Wall Street Journal-NBC polls.