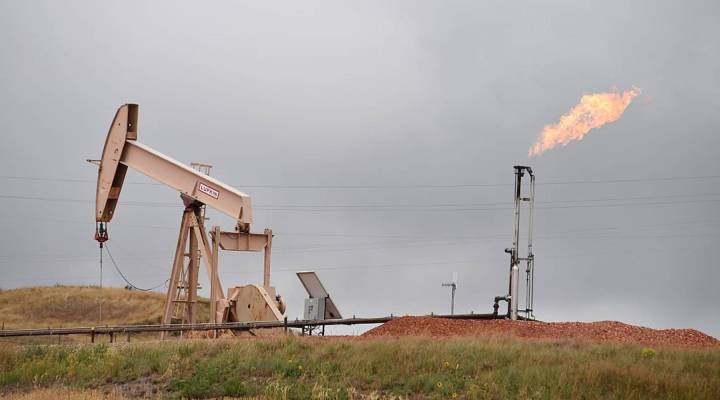 COPY
“I think the sort of the next rude shock perhaps in the oil markets is that we will be thirstier for oil for a lot longer than folks hope and expect,” says energy analyst Robert McNally. ROBYN BECK/AFP/Getty Images
Shelf Life

“I think the sort of the next rude shock perhaps in the oil markets is that we will be thirstier for oil for a lot longer than folks hope and expect,” says energy analyst Robert McNally. ROBYN BECK/AFP/Getty Images
Listen Now

Crude oil prices fell today following a government report predicting the biggest increase in U.S. production in two years and the Saudi Arabian energy minister publicly doubting whether that country will keep cutting production as promised. Once again, oil is the global economic wild card. Energy analyst Robert McNally’s book on the topic is called “Crude Volatility: The History and the Future of Boom-Bust Oil Prices.” He talked with Marketplace host Kai Ryssdal. The following is an edited transcript of their conversation.

Kai Ryssdal: Why is oil so different?

Robert McNally: Think about if the price of beer fell in half. What would happen to consumption?

McNally: Right. It would soar. What happens in the price of oil drops? Are you going to get in your car and drive around in the school parking lot just for the joy of consuming gasoline? No. Consumption really doesn’t increase that much. And it works the other way too — if you’re in the store, and you’re hungry and you want to buy chicken, but the price of chicken is expensive, you can buy beef. Now, when you have a commodity like oil, for which both the supply and the demand really don’t respond to price signals, what happens is, when you have an imbalance between supply and demand — which could be a recession, or it could be too much drilling— you see huge price swings. Because to get you to stop driving your car, that oil price has to go way up.

Ryssdal: There’s actually there’s a line in this book that says “prices themselves will not kill demand for oil, but a recession will do so and do it quickly.”

McNally: Right. You can kill demand and having a growing economy like we did in 2005, 6, 7, or you can kill demand by having a recession. On the other side, when there’s too much oil, we see what we saw up to February of last year. Oil had become a wrecking ball through the financial markets. And so, it’s these wild swings in oil prices — and remember, oil, of course, is the lifeblood of modern civilization — that makes boom-bust price cycles unacceptable.

Ryssdal: But also inevitable, right? I mean, since Titusville in Pennsylvania, we’ve had boom-bust.

McNally: Except, except, except. You’re right — inevitable, but for one thing. Through history, we’ve seen three groups of producers step in and vanquish oil price volatility through supply control. John D. Rockefeller and Standard Oil, who did this indirectly by monopolizing the refiners, and then Texas and Oklahoma implemented the most effective centrally planned communist control of any commodity we’ve ever seen.

Ryssdal: All right, so, you had John D. Rockefeller with Standard Oil, you had the Texas Railroad Commission and then you had OPEC as sort of the modern sort of reincarnation, right? The question is though, is OPEC dead?

McNally: You know, OPEC is not dead. They have a beautiful building. I go there. There will always be a forum for having them come and meet. But in terms of OPEC being the swing producer — yes. In the last 10 years, we’ve needed a swing producer, and we haven’t had one. Saudi Arabia was unable in 2008 and unwilling in 2014 to adjust its supply sufficiently to keep oil prices stable. So the Saudis have basically told us we better not need a swing producer, because they won’t play that role.

Ryssdal: One of the things you point out in the book is the speed with which — and I’m talking, like, 150 years ago now — back in Titusville and discovery and all that jazz, how quickly oil became the energy production tool of choice. What is the end of oil going to look like?

McNally: You know, I have to confess, I’m on the skeptical end of the range of analysts who believe that we’ll see the end of oil, especially in transportation, any time soon. And I think the sort of the next rude shock perhaps in the oil markets is that we will be thirstier for oil for a lot longer than folks hope and expect.

Ryssdal: Bob McNally. His book is called “Crude Volatility. He runs a firm here in D.C. called The Rapidan Group. Thanks for being here.

Excerpted from “Crude Volatility: The History and the Future of Boom-Bust Oil Prices,” by Robert McNally. Copyright (c) 2017 Columbia University Press. Used by arrangement with the publisher. All rights reserved.