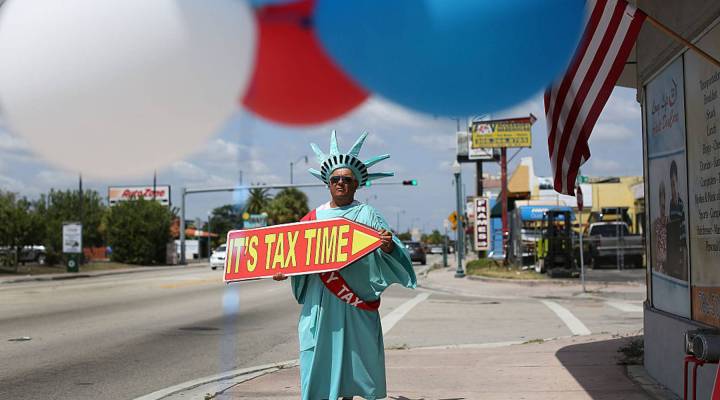 Andrew Newman, an associate professor of English and History at Stony Brook University, is not worried about filing his taxes today. He already completed his return and is expecting a small refund. Yet, he is not exactly happy with the way his taxes turned out. The problem? He didn’t get the chance to protest President Trump’s administration.

Newman’s taxes were automatically deducted from his paycheck, so he has already paid everything he’s owed.

But he’s ready for next year. Newman has changed his W4 allowances so that he would owe some portion of his taxes — and not pay them in protest — come April 15, 2017.

“I’m not sure how much, but at most it will be a small fraction of the total tax bill,” he said, adding that he is doing this to protest the legitimacy of the presidential election’s outcome. “For me, it’s not only about the possible foreign interference, but also about the basic subversion of democracy.”

As tax filing time approached this year, some Americans, like Newman, said they would withhold their tax returns this year as a form of protest. While it’s unclear how many people have actually done this, the IRS said previously that it was receiving a slightly lower amount of tax returns than last year. At the end of the first week of April, the IRS had received 3.6 percent fewer returns than the year before. More than 103.6 million returns were filed by April 7 of this year — down from 107.45 million last year.

But not paying taxes, whether it be the entire amount owed or just a portion, as form of political protest is a “frivolous argument,” according to the IRS. When reached for comment about people withholding taxes in protest, the agency deferred to press releases on its website.

“Like moths to a flame, some people find themselves irresistibly drawn to the tax protester movement’s illusory claim that there is no legal requirement to pay federal income tax,” the IRS quoted from a 1991 court case in last year’s report on frivolous tax arguments. “And, like moths, these people sometimes get burned.”

These individuals or groups mistakenly invoke the First Amendment to make their case, noted the IRS.

In a press release issued in February, the agency warned that frivolous tax arguments have been thrown out of court “time and again” and that the penalty for filing a frivolous tax return is $5,000. Those refusing to pay taxes can also face other penalties such as a civil fraud penalty, a failure-to-pay penalty and — if a case goes all the way to court — a penalty for making frivolous arguments in court. Additionally, taxpayers could be charged and convicted of a felony for filing a false return.

Despite the possible consequences Newman said he still plans to protest via taxes next year. He will pay most of his taxes, but withhold “a symbolic amount,” he said, so he expects collection notices and fines, but not jail time.

Each year, the Department of Justice releases a list of about a dozen tax-evaders who were caught and sentenced in the past year. The list usually includes businessmen underreporting their income and revenues, not declaring cash receipts, and lying to their accountants. According to H&R Block, in 2015, the IRS brought tax-evasion charges against just 1,330 out of 150 million taxpayers.

“My form of resistance would only be effective if a lot of people join in, publicly — by pledging to resist and then following through. I think there’s potential for that sort of critical mass as a response to Trump,” he said.