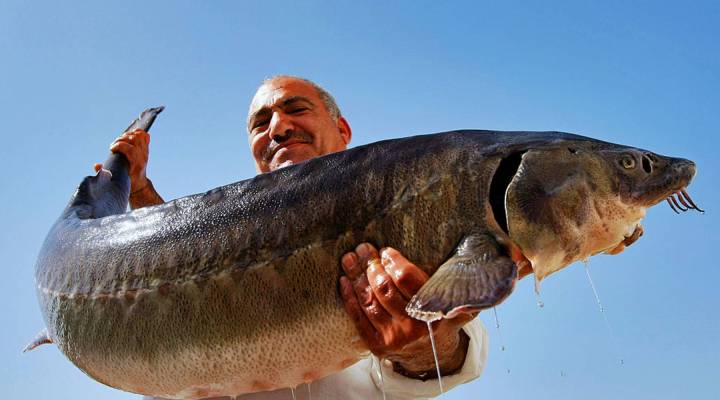 COPY
Freshwater sturgeon can be found around the world and can weigh up to 100 pounds. David Silverman/Getty Images

Freshwater sturgeon can be found around the world and can weigh up to 100 pounds. David Silverman/Getty Images
Listen Now

Sturgeon are probably best known for their roe, or it’s more famous name: Russian caviar. While most of the world’s caviar supply does, indeed, come from the Caspian Sea, freshwater sturgeon can be found around the world — including Lake Winnebago in Wisconsin. For two weeks every winter, hundreds of fishermen brave the Lake Winnebago ice in attempt to bag a giant sturgeon, which can reach up to 100 pounds. If you’ve seen the movie “Jaws,” then you already know that for fish that big, you use a fishing spear instead of a pole. Julia Kramer, special projects editor at Bon Appetit, went to the annual sturgeon spearing in February 2016. Marketplace host Kai Ryssdal spoke to Kramer about her sturgeon experience. Below is an edited transcript of the interview.

Kai Ryssdal: I need you to explain for me how it came to pass that you were driving around on a frozen Lake Winnebago in February, because it just doesn’t sound like a whole lot of fun.

Julia Kramer: Well, it was kind of my dream come true. I grew up in the Midwest, and I had heard about the sturgeon spearing season on Lake Winnebago, which is a 215 square mile lake sort of halfway between Milwaukee and Green Bay. And I said to my boss, “I would love to go to Wisconsin and do a story about this, and just sort of see why people are sitting out on this frozen lake for days at a time hoping to spear a sturgeon.” And everyone in the room kind of laughed, except for my editor in chief. And he was like, “Really? You want to do that? OK. Yeah, sure. Go ahead.”

Ryssdal: All right, now about the fish itself: You paint an extremely unappetizing picture of it. The people up there, most of them say it’s not all that delicious. It’s not like you can go to a restaurant and buy it and eat it anyway, right?

Kramer: Yeah. This was shocking to me, because some of my interest in this story came from the fact that I love to eat smoked sturgeon. I obviously am a fan of sturgeon caviar. And so, I thought, “Oh, you know, I bet when I’m there researching the story, I can go to the local supper club and get a sturgeon sandwich or whatever.” And that’s not what happens at all. In fact, it’s not legal to sell the sturgeon in any establishment, so you sort of have to know people. And it’s very much a community activity, where when someone spears a sturgeon, maybe a couple of weeks later they’ll smoke it and invite their friends over and serve it to them. But you would never find it in a restaurant.

Ryssdal: So you got to know a guy who knows the guy?

Kramer: Exactly. And now since I’ve been once, I know a few guys.

Ryssdal: Can we talk for a second, since you mentioned it, about the caviar sturgeon? This is the same fish that the Russian caviar has made famous, right?

Kramer: A very similar fish. So back in the day, the Great Lakes were full of sturgeon, which are huge fish. I mean, people are hoping to spear a fish that weighs upwards of 100 pounds. And they’re sort of beastly creatures. And they were very prized. There was actually sort of a caviar craze, you could say, in the 1890s. And because of that, it wiped out most of the sturgeon population in the Great Lakes. But somehow the sturgeon population in Lake Winnebago hung on, and you can really get this very prized fish and this prized roe right in Wisconsin, whereas people think of it as this Russian delicacy.

Ryssdal: Would you do it again, all in?

Kramer: I would totally do it again. I was very sad to miss it this past year.