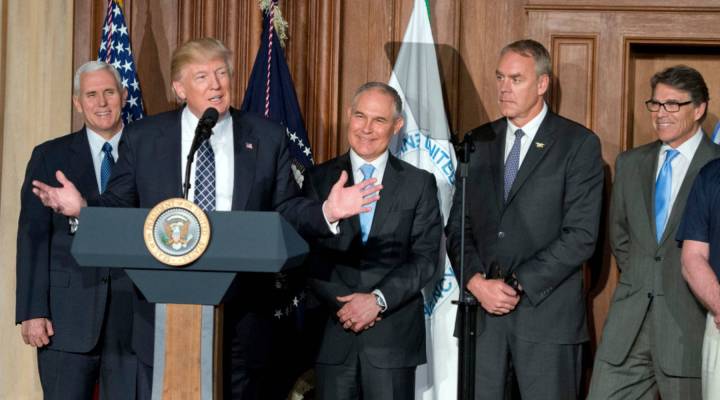 Today, President Trump visited the Environmental Protection Agency to sign an executive order intended to halt regulations from the Obama era and to pave the way for a coal comeback. But will the executive order work as intended? Marketplace guest host Molly Wood spoke with Scott Tong from our Sustainability Desk in Washington. Below is an edited transcript of their conversation.

Molly Wood: So help me prioritize: What are the most important pieces coming out of this from the perspective of energy companies and the climate?

Scott Tong: Well, I’ll give you one piece: By far, what’s gotten the most attention is a set of rules on power plants that exist today. It’s called the Clean Power Plan, which actually hasn’t taken effect yet, but it would basically speed up the decline of coal-fired power plants. Which is the dirtiest source of electricity, and it’s reeling because coal already can’t compete with natural gas. And the White House says it will initiate a review of the Clean Power Plan, which doesn’t really sync up with the verbs this president tends to use, but it’s because it takes a lot of steps. There’s a lot of uncertainty. If you want to rescind or revise a regulation that’s on the books, you have to go through all these steps as if you were passing a new one. You have to draft language, you have to ask the public to comment, you have to do your analysis. And then you have to gear up for a legal fight, says Ethan Shenkman. I spoke to him today. He’s a former career lawyer at the EPA and the Justice Department, and now he’s at the firm Arnold & Porter.

Tong: And these legal machinations and uncertainty apply to a whole host of things in this executive order, Molly. So lot of “we don’t know” going on.

Wood: So let’s say that it gets through all of those legal challenges. It somehow goes through in its entirety, or close to. How does that change the U.S. emissions outlook?

Tong: Well, that analysis has been done. And U.S. emissions have been falling for a number of years, mostly because of market forces, but then they would flatten out, according to a new analysis of the Trump executive order. So coal would get a little bit of a lifeline. And so our emissions would flatten, and certainly fall short of the U.S. goal in the Paris global climate agreement.

Wood: Let’s talk about that coal lifeline and also how it potentially affects the rest of the energy markets.

Tong: With regard to coal, I’ve spoken to a lot of people. I went to coal mining areas of Illinois recently. I talked to executives, utility analysts. Nobody has told me that coal is going to come back to where it once was. There are just so many market things going on here. As far as other types of energy, state policies continue to demand a lot of solar and wind and renewable energy, and natural gas is the biggest story driving all of this. We have a lot of this in the United States, so in a way, technology fracking has already kind of made U.S. oil and gas “great again.” So that’s going to keep driving things. And with regard to coal, deregulation can only get you so far.