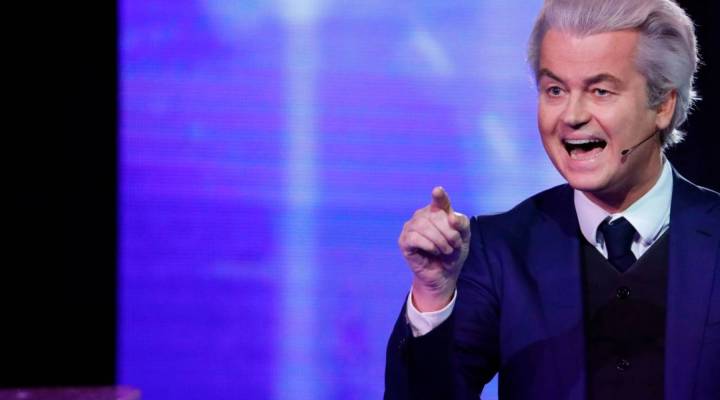 First there was Brexit. Then there was Trump’s presidential victory. Where next for the populist, anti-establishment wave that was in full flood last year? Has it petered out or is it about to wash up on mainland Europe? The first test will be this Wednesday when the Dutch hold a general election, and all eyes will be on one of the front-runners, Geert Wilders, leader of a far-right, anti-Islam, anti-immigration and anti-European Union party.

“I support Geert, and so do many of my parishioners,” Pastor Henk-Jan Prosman told Marketplace.

The protestant minister said most of the people who worship at his church in the Dutch countryside are not the rootless, cosmopolitan, liberal types that dominate Amsterdam.

Wilders has pledged to curb what Prosman feels is a threat to Christian values — the further influx into the Netherlands of Muslim immigrants.

“What could be more natural than restoring border controls? And yet the mainstream parties call that extreme,” Prosman said.

But Wilders’ election program, which is only one page long, goes much further than calling for restrictions on immigration; it promises to “rid the Netherlands of Islamisation” by closing mosques, banning the Koran and prohibiting the wearing of Muslim headscarves at public gatherings. Political analysts have derided these proposed measures along with Wilders’ claim that they will save the Dutch taxpayers $7.5 billion a year.

“The legal cost of implementing these policies would be enormous … multibillions for sure. I think every mosque and every religious person in the Netherlands would take a Wilders’ government to court,” scoffed Andre Krouwel, a political scientist and founder of Kiescompass, a website that helps voters choose which candidate to support.

“Wilders is also promising to pull the Netherlands out of the EU, cut income tax and rents, and spend more money on defense and policing, all at no extra cost to taxpayers. This guy is clearly not serious about governing,” Krouwel said.

Wilders has been dubbed the “Dutch Trump” and not just because of his blond bouffant hair style. Jan Paternotte, a center-left candidate in the election, said Wilders models himself on the American president.

“He even tweeted at some point ‘Make the Netherlands Great Again.’ And, like Trump, he avoids using the mainstream media to get his message across. He tries to create the image of the media as an enemy of the people,” Paternotte said.

Wilders commands a 16 to 18 percent share of the vote, according to opinion polls, and almost all of the other 27 parties contesting the election have stated that they would never form a coalition government with him. Dutch pundits and pollsters say that, unlike Trump, Wilders will definitely not win power. But as Trump knows well, pundits and pollsters can get it wrong.