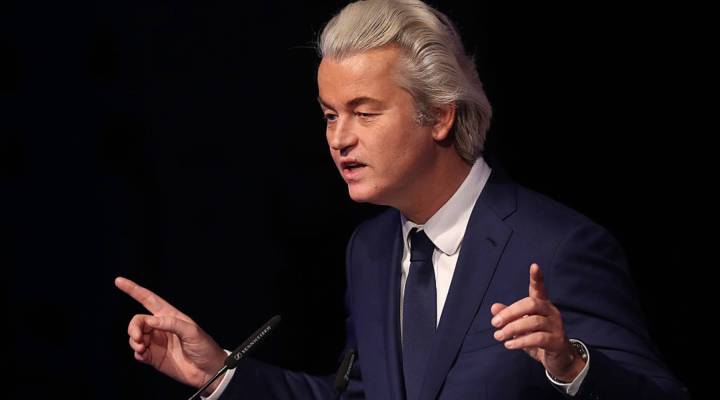 Journalists in search of supporters of the far right Dutch politician Geert Wilders gravitate toward the small lakeside town of Volendam, northeast of Amsterdam. The town, once a major fishing port and now a flourishing tourist attraction, is a Wilders stronghold.

“We’re voting for Wilders as a protest,” said Wim Keizer a former town councilor who now runs the Volendam Museum. “We feel the mainstream politicians have not done enough for this community. We like the fact that Geert is very critical of the European Union. Our fishing industry has been ruined by EU regulations. We once had the biggest fishing fleet in the Netherlands, more than 200 boats. Now we’re down to just four.”

Theo Sterk, who manages his family’s small pickled herring bottling factory on the outskirts of Volendam, is another Wilders’ supporter.

“He is the only one who addresses our problems,” Sterk said. “For me, immigrants are the main issue. Especially Muslim immigrants. And Geert says he wants to end all immigration from Muslim countries. They don’t want to abide by our rules, and they don’t want to work and to integrate.  Especially the Moroccans. They are a problem. A burden.”

Dutch Moroccans make up only 2.3 percent of the population of the Netherlands, but in percentage terms, they do record higher levels of crime, unemployment and welfare dependency. Sterk said that Wilders is the only leading politician prepared to talk about this.

“He has my support. I won’t vote for anyone else. So if I vote on Wednesday, I vote for Geert.”

To his many critics, however, Geert Wilders is a racist and a rabble-rouser, and a convicted one at that. Last December he was found guilty of inciting discrimination at a political rally after he asked a crowd of his supporters, “Do you want more or fewer Moroccans?” The crowd chanted “Fewer! Fewer!” and Wilders responded, “We will arrange it.”

Many pundits have united to deride Wilders’ political program, which covers just one sheet of paper and includes a plan to close all the mosques, ban the Koran, withdraw from the European Union, cut income tax and spend more on defense, and all at no extra cost to the public purse.

“This program is not to be taken seriously at all. Period,” said professor Bas Jacobs of Erasmus University in Rotterdam.

But Wilders himself cannot be ignored. He probably wouldn’t be able to form a government after this week’s election. He would need a coalition, and almost all the other 27 parties taking part will have nothing to do with him. But Jan Paternotte, a candidate for the center-left  D66 party, said a big surge of support for Wilders could have European repercussions, further boosting  the anti-immigrant, anti-EU National Front leader in next month’s French election.

“It would send a message to the French that the Netherlands has given populism an even stronger voice. And that, of course, might help Marine Le Pen,” Paternotte said.

This European dimension makes the Dutch election unusually important. The result will be the first major indication of whether the populist, anti-establishment, anti-immigration wave that swept the U.S. and the U.K. last year is about to engulf continental Europe. If it does, with Wilders’ help, wash into France and bring Marine Le Pen  to victory, it really could spell the end of the euro and possibly the European Union, too.