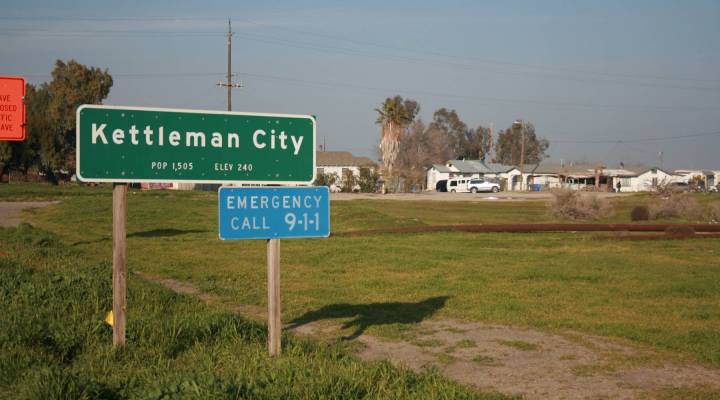 COPY
Kettleman City, California, is between Los Angeles and Sacramento. The state supplies residents with bottled water because tests showed high levels of arsenic in the drinking water. Scott Cohn

The crisis in Flint, Michigan, drew national attention to the issue of safe drinking water. The Trump administration has offered few specifics on what it plans to do about it. But Flint is just one example. Other communities are tackling water problems too, like Kettleman City, California, which has been dealing with unsafe drinking water for years.

Kettleman City seems like just a random spot on the long drive up Interstate 5, roughly midway between Los Angeles and Sacramento. But just past the gas stations and fast food joints at Exit 309 is a town of about 1,500 people. They include Maricela Mares-Alatorre, a teacher and community activist who has lived there for 40 years.

“Our claim to fame is that we have very, very poor water quality,” she said during a recent driving tour around town.

Maricela Mares-Alatorre, a teacher and community activist, has lived in Kettleman City, California, for 40 years.

The tour doesn’t take long. Kettleman City, which isn’t a city at all but a “census-designated place,” is tiny, just a few square blocks. In part, that is because new construction is restricted due to the water problems. Mares-Alatorre drove us past small homes dating back to the 1930s on streets named General Petroleum and Standard Oil.

“A nod to our past as an oil drilling community,” she said.

Oil drilling is one of the factors in the contamination. The two wells that serve the town have special machinery to remove toxic benzene from the water, though the chemical is subsequently released into the air. Another contaminant is arsenic, a carcinogen that is naturally occurring in the groundwater of California’s Central Valley.

Kettleman City is technically a “census-designated place” — tiny, and just a few square blocks. In part, that is because new construction is restricted due to the water problems.

In 2008, government tests found excessive levels of arsenic in the drinking water. Five years later, the state began supplying every home with bottled water. The crisis in Flint struck a chord in Kettleman City.

“I think people said, ‘Wow, that’s bad for them. That’s something that we’ve been going through too,’” Mares-Alatorre said.

People are going through it in a lot of places.

In an “exit memo” submitted just before leaving office in January, President Barack Obama’s EPA Administrator Gina McCarthy estimated the nation’s drinking and waste water systems need $655 billion in improvements. The Donald Trump administration has not said whether it accepts that number. But it has signaled that when it comes to big infrastructure projects, like building roads or bridges, it favors public-private partnerships paid for in part by tax breaks.

“If you’re a private investor looking for steady returns over a long period of time, betting on ratepayers, say, in a big municipality or in a group of smaller municipalities, or in a county, that’s a pretty steady stream of income,” he said.

But the operative word here is “ratepayers.” Kline said that in order to bring the nation’s water systems fully up to speed, including for small or poor communities like Kettleman City and Flint, consumers will need to accept rate increases.

“The political reality that I think all of us need to grapple with is that there is a certain baseline of water that we need to get to the poorest of the poor,” he said. “We’ve had a remarkable run of success in the United States, Flint being an obvious counter example of that, of delivering safe, clean water in a way other countries sometimes can’t. But the only way to keep doing that is to make these massive long-term investments that hurt.”

Kettleman City is supposed to get a new treatment plant as soon as next year, after years of delay. The facility would draw water from the nearby California Aqueduct, instead of from the ground. The aqueduct carries fresh water from the Sierra Nevada Mountains to Southern California, but passes by Kettleman City, running along the edge of town. The plan is to use state and federal funds, but some wonder if the federal piece will come through in the new administration.

The California aqueduct, which carries fresh water from the Sierra Nevada Mountains to Southern California, passes by Kettleman City, running along the edge of town.

“I’m worrying that it’s going to be placed on the back burner again,” Mares-Alatorre said. Kettleman City residents have already been told to expect higher water rates when the plant is complete.

And while Kettleman City’s project does not rely on private funding, Mares-Alatorre worries about how other communities like it would fare if water projects depend more heavily on private investors.

“I think they want to invest where it’s already nice, where people are clamoring to live,” she said.

Officials say they plan to break ground on the Kettleman City plant this spring. Residents say they have heard it before. They just hope someday to do what most of us take for granted: drink water from the tap. 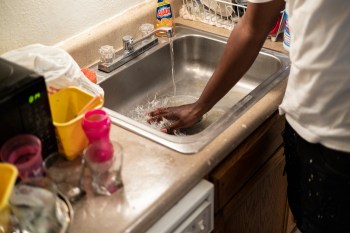 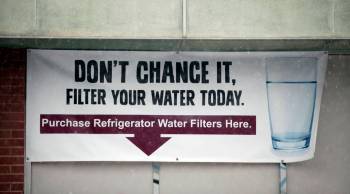