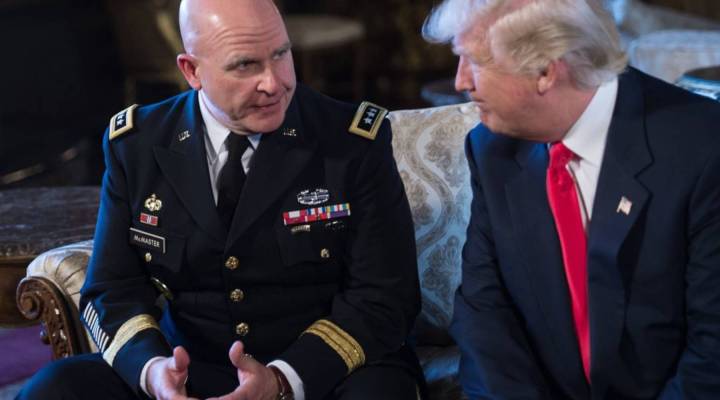 COPY
Army Lt. Gen. H.R. McMaster, above with President Donald Trump, has an impressive reputation, but he doesn't have a lot of time in Washington, says consultant Erin Simpson. NICHOLAS KAMM/AFP/Getty Images

Army Lt. Gen. H.R. McMaster, above with President Donald Trump, has an impressive reputation, but he doesn't have a lot of time in Washington, says consultant Erin Simpson. NICHOLAS KAMM/AFP/Getty Images
Listen Now

President Donald Trump has named Lt. Gen. Herbert Raymond McMaster as his national security adviser. What challenges does McMaster face and how prepared is he to manage them? Marketplace host Kai Ryssdal talked with Erin Simpson, national security consultant and co-host of the “Bombshell” podcast. Below is an edited transcript of their conversation.

Kai Ryssdal: Give me the organizational challenges that Gen. McMaster faces on the National Security Council, because it’s a new environment for him.

Erin Simpson: It is. And so I think there’s definitely two challenges. One in the White House and one in the inner agency more broadly. The national security adviser really has three jobs. One is to manage that interagency policy process — that’s all the agencies and bureaucracies that support national security policy. The second is to manage his own staff on the NSC, and the third is to advise the president. His staff is actually in pretty decent shape. He has a few allies there already, so I think that will be a little bit easier. But we currently have a real shortage of national security staff in the Defense Department and in the State Department. There are no undersecretaries, there are no assistant secretaries and that’s going to make it really challenging to coordinate a policy process when there physically aren’t the bodies in those buildings to do that work.

Simpson: I think that’s going to be really interesting. So H.R. McMaster has a pretty impressive reputation in the broader national security community. He probably fought the last famous tank battle during the Gulf War. He’s got a Ph.D. in military history. He’s got a very famous book. But what he doesn’t have is a lot of time in Washington and certainly no prior time on the NSC staff itself. So he’s going to have a learning curve. He’s a very charismatic person. But he can be kind of a polarizing person. He’s often said not to “suffer fools easily.” That’s great, unless you’ve been designated a fool, in which case, he might not be your favorite person to work with.

Ryssdal: Stepping back to the big picture here for a second, President Trump campaigned on and won on this idea of bringing substantive change to Washington. Do we need substantive change in the national security apparatus in this country?

Simpson: That’s a great question. It really depends on how happy you were with the Obama administration’s foreign policy and with the broader international consensus with regard to things like our allies in NATO and also in East Asia. So there will be certainly some changes to policy. I would guess particularly with regard to Iran; Gen. McMaster is fairly hawkish, as are his collaborators in the Defense Department. But I don’t know if we’re going to see, or if we should see, major revisions to policy with regard to Russia or Syria and much less China and other parts of the globe.

Ryssdal: Gen. McMaster seems to be riding very high popularity-wise now. I mean, everybody who is anybody in national security is saying that this is the guy to have. What are the bumps? What are the pitfalls that he ought to be aware of?

Simpson: I think he should go back and watch that tape of Secretary Mattis looking over President Trump’s shoulders signing immigration EO in the hall of heroes at the Pentagon. That’s an image, for a lot of folks, that’s really hard to get out of our heads. I’m told that Secretary Mattis didn’t have a lot of notice on that. That seems kind of deliberate to me. And I think he’s going to have to look for a fair amount of moral courage in terms of telling truth to power, both to the president and to the interlocutors across the government, trying to make sure that we keep foreign policy and national security interests at the heart of the matter and not to let politics come into that at all.

Ryssdal: Which is, of course, what he wrote his book about back when he was a captain, right?

Simpson: He sure did. Exactly.

Ryssdal: Erin Simpson writes for the blog War on the Rocks. She also co-hosts the podcast “Bombshell.” Erin, thanks very much.