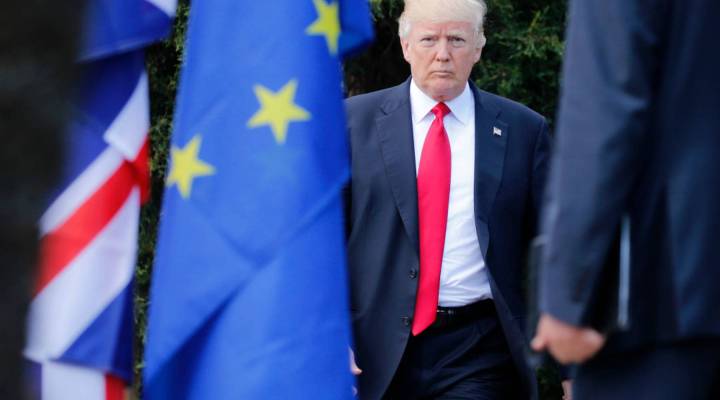 President Trump is back after his first overseas diplomatic trip, the end of which was a little rough. Troubles emerged surrounding NATO and the G7 summit, which leads to the question: what’s the future of our trans-Atlantic trade relationships? Stephen Gross is an assistant professor of history at the Center for European and Mediterranean Studies at New York University. Marketplace host Kai Ryssdal spoke to Gross about the trajectory of our trans-Atlantic relationships. Below is an edited transcript of their conversation.

Kai Ryssdal: First of all, your take on the president’s trip — what do you think?

Stephen Gross: Well, you know, I think it raised a lot of concern in Europe. You know, from the European standpoint, Angela Merkel and other European leaders saw it as a problematic trip. And I think it raises a lot more questions than it settles.

Ryssdal: There’s an op-ed in the Wall Street Journal. Dropped last night, it’s in the paper this morning. I’d like to read it to you. It’s by H.R. McMaster, the president’s national security adviser. Also Gary Cohn, the head of the National Economic Council, talking about the president’s trip. And I want to read you some of it, and then get your thoughts. First of all, this sentence: “The president embarked on his first foreign trip with a clear-eyed outlook that the world is not a ‘global community,’ but an arena where nations, non-governmental actors and businesses engage and compete for advantage.” How do you think that’s being read in Europe and around the world?

Gross: I think that does not dovetail with the way most European leaders, especially German leaders, see the global community. They really stress the cooperative nature of global relationships, and they tend to see the world more as a place of mutual benefit and less as a place of zero-sum competition. So I think that this is not really the way that particularly Angela Merkel sees the world, in particular in the way that they see economics and trade.

Ryssdal: So as we go forward in this country with the president’s America-first agenda, what does this bode then for how we’re going to conduct trade, and more importantly, how foreign countries are going to look at us when we go to the table and say, listen, let’s negotiate this stuff?

Gross: Well, I think it’s going to bring a more combative atmosphere. I don’t know how it couldn’t, in the sense that if one actively approaches economic negotiations as a benefit for you, or a win for you, and a loss for your competitor, that really frames the way people understand the negotiation. I think there are a lot of potential areas of negotiation out there where the Europeans see things in a very different manner. And I think bringing a different philosophy is going to lead to more intense negotiation over these things.

Ryssdal: Is this a document, this op-ed, then, do you think, is it for the international community or is it for the president’s base here at home?

Gross: It’s for the president’s base here at home. McMaster ends with a paragraph where he says, “America first signals the restoration of American leadership,” and that, I think, is a way for the administration to try and pivot and change the meaning of a main message of the primary campaign. That’s not how the Europeans would read it. That’s clearly shown, or demonstrated, in the way that Merkel has reacted and said that the Europeans now have to expect to go it more alone, which is a big change in attitude, I think. And that sentence in particular struck me as something that is geared towards the domestic audience here in America, and not for the European audience.

Ryssdal: Well, let me read it to you. The last sentence says, America first means using “the diplomatic, economic, and military resources of the U.S. to enhance American security, promote American prosperity, and extend American influence around the world.” Why would anybody join with us if what we explicitly are looking for is not a global community, but rather the advancement of only American interests?

Gross: I mean that’s a good question. And I really don’t have an answer for why people would find this message to resonate overseas.