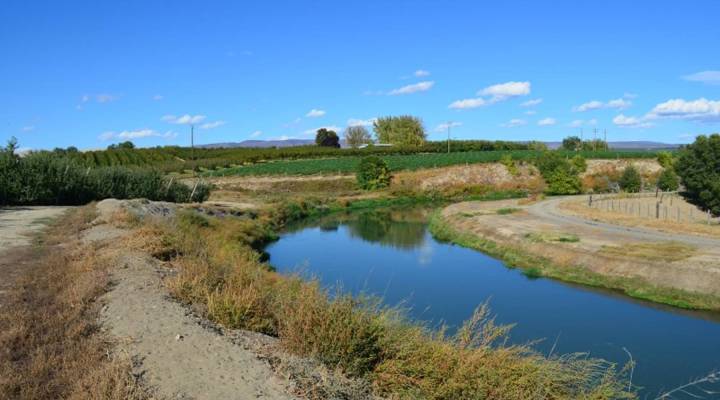 “They’re all perennial crops,” Carpenter said. “And if you don’t get water to them, it not only affects yield from that year, but it affects the health and the viability of that plant for years to come.”

Washington state’s agricultural regions are starting to see less water in the summer, thanks to climate change. So one area, the Yakima Valley, is trying to move the water it has toward the highest-value crops. That will require making it easier for some farmers to sell their water to other farmers.

Farmers in the Yakima Valley lived through an excruciating drought in the summer of 2015, and climate scientists say summer water may be scarcer in the future. When there’s not enough water, farmers like Carpenter lose serious money.

“Without water from the Yakima River Basin, we’re up a creek without a paddle and a boat and water. You may be losing as much as $5,000 an acre,” he said.

Joe Cook, an environmental economist at the University of Washington, explained how a water market works:

“Some farmers would go to other farmers and say, ‘Hey, are you willing to let me use your water so I can water my vineyard, or my orchard, or a crop that I really can’t let go dry?’”

In other words, the water’s so valuable that farmers with low-value crops could choose to make money by selling their water instead of planting for a season. Right now, those farmers have little incentive to sell their water to other farmers, in part because there’s a complex legal process involved.

That’s what Washington officials are trying to fix. Legislators are still working to secure final funding for the plan, but once it’s in place, it could serve as a model for how to make sure water flows toward the highest-value agriculture.