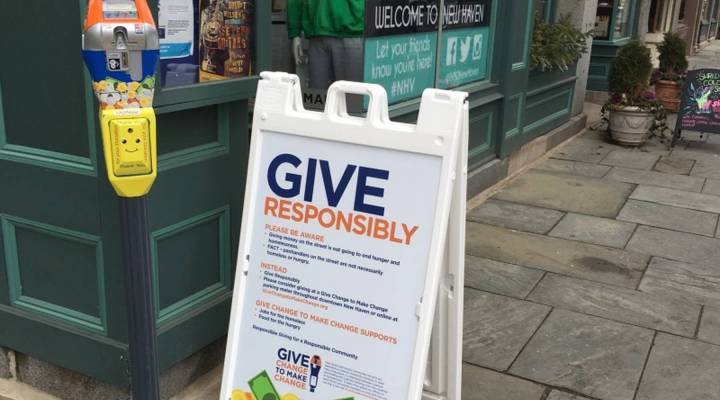 Surrounded by the storied buildings of Yale University in downtown New Haven, Connecticut, Rich Coovers sits on a step holding a sign that says “homeless” and “hungry.”

“I’ve been clean from crack cocaine going on a year,” he said. “I lost my housing due to my drug addiction, and I went to jail. I just got out of jail two months ago, so right now it’s a little struggle.”

Coovers said he’s frank with people who give him money — he might go buy a beer. But just about a block away there’s some competition for spare change — a brightly colored meter that accepts cash or credit card donations in a New Haven initiative called Give Change to Make Change.

Rich Coovers said many people in New Haven are generous to him.

The “donation meter” is an attempt by some cities around the country to offer an alternative to giving cash to people who are asking for money on the street. New Haven is one of the latest to adopt the system. So far, the city has installed four meters and has plans to install six more.

“We thought for the kindhearted people who really want to help people who are in need, who are homeless, that we would have a way for them to give dollars,” said New Haven Mayor Toni Harp.

Harp worked on the idea with downtown merchants who want to cut down on panhandling.

“It’s something that we believe detracts from our city,” she said.

New Haven Mayor Toni Harp believes cutting down on panhandling will improve the image of the city.

The donations will go to a homelessness outreach initiative run by local nonprofit Liberty Community Services, which provides housing for the homeless.

“I think the principal issue behind it is really education,” said John Bradley, the executive director of Liberty. He said there are enough services available in New Haven that no one has to panhandle to meet their basic needs, and he wants the initiative to make people think.

“If you’re seeking to end homelessness, giving money to panhandlers may not be the solution to that,” Bradley said.

Mark Horvath has experienced homelessness and addiction in his own past, and he’s against the meter program.

“How you educate the public is listening to that person on the street, giving them a voice,” he said. Horvath now runs an advocacy group called Invisible People.

“The meters are not going to end panhandling,” he said. “They’re not going to raise any significant amount of money for homeless services, and they reinforce wrong stereotypes that all homeless people are bums and lazy, and that’s, oh, my gosh, so wrong.”

And New Haven’s panhandlers themselves? Some say they don’t mind the meters — others say the money’s better in their pockets.