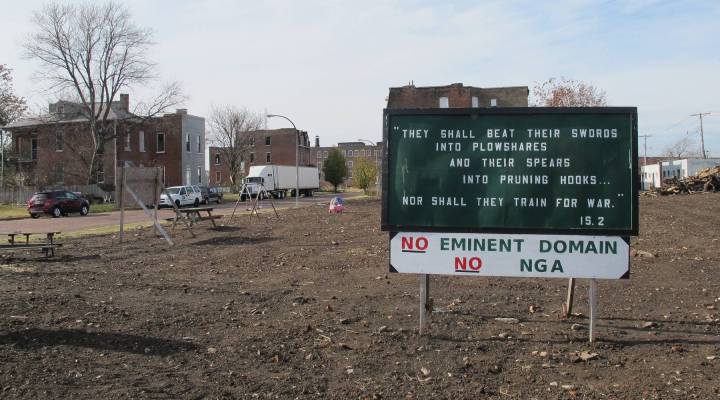 COPY
The decision to locate the new NGA facility in the historically black North Side of St. Louis was fought by the few remaining residents in the area, some who staged protests at this site. Kimberly Adams/Marketplace

The decision to locate the new NGA facility in the historically black North Side of St. Louis was fought by the few remaining residents in the area, some who staged protests at this site. Kimberly Adams/Marketplace
Listen Now

The city of St. Louis is trying a new strategy to fight urban blight. A massive project to raze an entire neighborhood and turn it into a new campus for a government intelligence agency.

The $1.75 billion project will keep thousands of jobs in the city, but comes at the expense of a historically black community that remains skeptical of how much of the development will benefit them.

The National Geospatial-Intelligence Agency (NGA) has had a presence in St. Louis for decades, but outgrew its old facility. St. Louis joined other bidders in offering the agency land for free in order to keep the facility in the city.

Darren Spencer’s home in North St. Louis. Soon, this area is to be the new location of a campus of the National Geospatial-Intelligence Agency.

The area where it will eventually be located is a blighted section of North St. Louis, where, according to the city, only 88 structures were occupied in the 100-acre area.

But it was a controversial process convincing the families remaining in the neighborhood to leave. Some were forced out by eminent domain.

<<Listen to some of St. Louis Public Radio’s in-depth reporting of the NGA project over the past year.>>

“If we had to move, we had to move. At least they’re paying you,” said 58 year-old Darren Spencer as he oversaw cousins and nephews moving boxes and bags out of the family home in the neighborhood. He lived there with his parents and his son until his parents both died in 2016. Spencer said the home was full of good memories.

“My mom, my dad, they loved the holidays—cooking dinners and stuff like that,” he recalled. “[They hosted] Barbecues, played music, and everything like that. This was a happy home.”

Spencer said his family was able to get a better price on the home than they might have otherwise, but they were still some of the last to leave the area.

Darren Spencer (left), with his son Darren Jr. take a break from the moving process at the family home in North St. Louis.

The City of St. Louis is spending more than $50 million to buy up 551 parcels of land it will clear to make way for NGA, an intelligence agency that relies on satellites and scientists to provide data to other defense and intelligence agencies, as well as first responders.

For the city, it’s a chance to keep the tax benefits of the thousands of jobs that will now stay in the area, create hundreds of construction jobs, and potentially encourage more development around the new site to cater to NGA workers.

Todd Swanstrom, who studies urban development projects at the University of Missouri-St. Louis’ Public Policy Research Center. He said this approach has potential, but it’s a risky strategy.

“Generally speaking this kind of trying to hit a home run ride with one big project is is not generally successful,” he said. Although, this project is a bit different than most.

“I don’t think we’ve ever seen a case like this where an agency that is so high tech and has had so much in the way of national security issues involved … is located in a relatively poor community like the north side.”

Susan Pollmann is the program director for the future site, and acknowledges the skills available in the area job pool may not match up with the high-tech STEM jobs at NGA.

“Today NGA doesn’t look like this community,” she said. “But I would say we certainly are making every effort to broaden the diversity of our workforce as time goes on.”

The NGA’s Susan Pollmann tours the site of the future “NGA West” facility with Otis Williams, Director of the St. Louis Development Corporation.

Pollmann said the agency is already working with local schools and colleges, offering internships and other initiatives to interest students in math and technology. In the meantime, local groups are mobilizing to ensure construction and other related jobs benefit women and minorities in particular.

The new facility is expected to be completed sometime in the early 2020s. Pollmann is careful not to overstate how much impact the project will have in the broader community.

“NGA coming to this location– We’re not the end all-be all,” she said. “But maybe we’re a spark– and a spark that’s enough to make this neighborhood and its residents proud.”