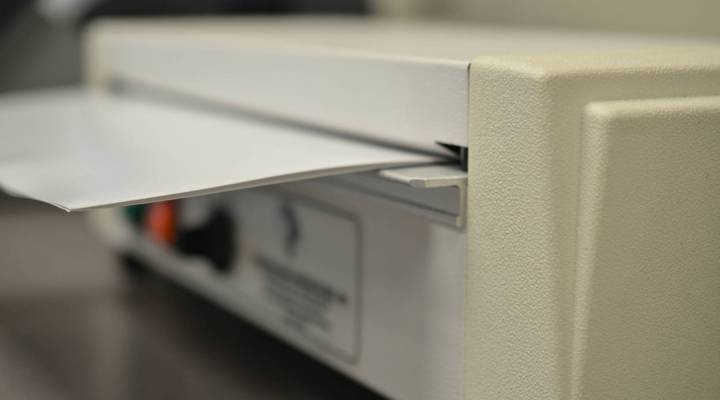 When’s the last time you laminated something? Been a while? You wouldn’t be the only one. A shift toward digital documents has had a domino effect: office laminators, binders, anything to manage office paper is becoming less common.

Sales of binding and laminating machines have been slowly declining for years, and analysts expect that to continue. I confess that I love laminators — the noise, the weird plastic smell…so I went looking for them.

“I don’t think I’ve seen a laminator since I volunteered at a library in my hometown,” said Alex Wall, head of PR at a Brooklyn startup called Jukely. At Jukely’s new office you’ll find high ceilings, standing desks, computers, and just one sad little printer in the corner that no one ever uses; pretty much no paper anywhere. Wall points to a Keurig, one of those coffee machines with the pods: “This is the piece of office equipment that gets the most attention.”

Demand for laminating machines and a variety of other paper preservation products has been falling, and analysts at IBISWorld expect it to continue to decline as digital storage becomes the norm even for signed paperwork.

At Seventh Avenue Copy and Office Supplies, manager Win Komain said he sells less paper, more toys, and decorations; it’s become more of a party supply than an office supply. The store does do a lot of copy services, but it’s a hyperlocal model.

“Either you go very, very, very local, or you cannot survive,” Komain said.

The store has one tiny laminator tucked in the back, for this whole dense neighborhood. These days, people and businesses that need something laminated can also send out orders, rather than finding an actual physical machine themselves. So, laminators probably aren’t totally going away, but they may go the path of the record player: cool, but rare.