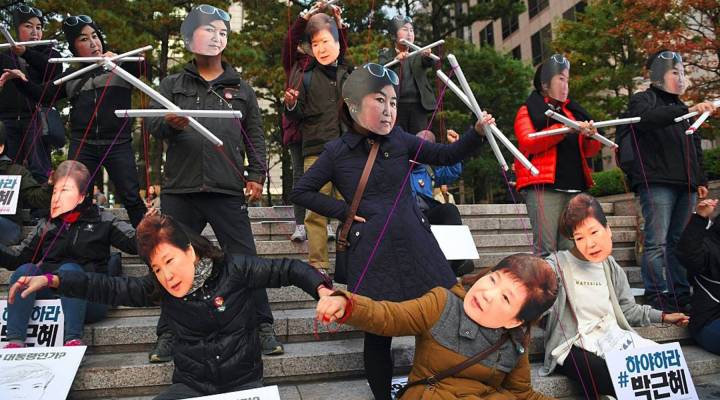 Prosecutors in South Korea are investigating  a corruption scandal involving President Park Geun-Hye. Allegedly, President Park’s friend asked major companies, namely Samsung, for large donations for the South Korean government. Now, people protest outside the Blue House, the President’s residence, every Saturday and demand that she resigns. This scandal, paired with President-elect Donald Trump’s comments about the country have sent the nation into a state of uncertainty about its future.

Stephen Evans is a Seoul Correspondent for the BBC and has been covering this story.

On how this scandal is affecting the economy:

They’re raiding these offices because they want to know why particular companies gave money. Samsung, for example, gave about $3 million to these funds. Samsung and the other companies are not saying. We simply don’t know whether the companies are being investigated…as witnesses or as criminals, really.

On how the country is feeling amidst this scandal:

There is uncertainty and I think it’s big uncertainty in a pretty dangerous situation. And it’s partly because of this political crisis in Seoul, but it’s also because of the things which President-elect Trump said before— on his way to winning the election. [He] signaled, for example, that he thought South Korea was getting its defense [for] cheap, that Japan was getting its defense [for] cheap, and he signaled that it might not be a bad thing if South Korea and Japan had nuclear weapons. So, you think of Kim Jong-Un, who is developing his nuclear arsenal and people here are saying well, you know, where do we stand with this? Where do we stand with Mr. Trump? Is he really going to pull the Americans out? What’s the policy going to be? We really do not know.