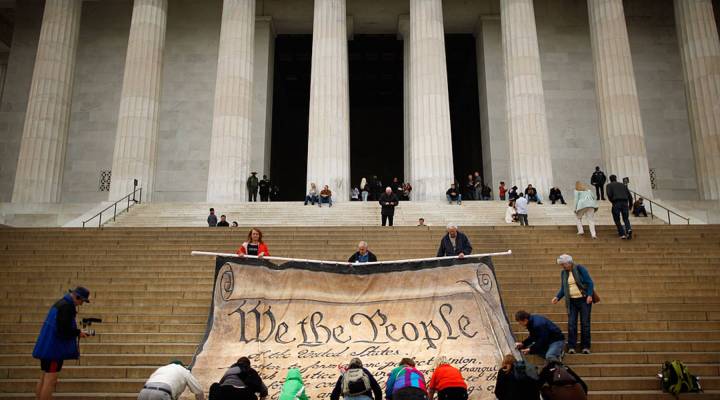 COPY
Public trust in government is at a historic low, according to a recent Pew survey. Chip Somodevilla/Getty Images

Public trust in government is at a historic low, according to a recent Pew survey. Chip Somodevilla/Getty Images
Listen Now

The West tends to think highly of itself when it comes to dealing with corruption, but it’s an image that’s been showing cracks, according to the book “Unmasked: Corruption in the West.”

Illicit activities related to finance and politics are receiving an increasing amount of attention in the European, American and Canadian press. “Unmasked” suggests that while these countries have a tendency to point fingers elsewhere when talking about corruption — maybe by making references to corrupt dictators in Latin America or sub-Saharan Africa — they need to look closer to home.

Co-author Laurence Cockcroft argues that money in our own political system is spread unfairly, while our international dealings are also subject to corruption.

Though the U.S. has passed measures like the Foreign Corrupt Practices Act of 1977 — which aims to prevent the bribery of foreign officials — they are currently under threat, he told Marketplace in an interview.

“The president has described that as a horrible act,” Cockcroft said. “And if that’s the basis on which we’re going to move forward, it will be a setback not only, too, from the U.S. perspective, but very much from the rest of the industrial world.”

Cockcroft argues that the Citizens United v. Federal Election Commission ruling — which says corporations and unions can spend an unlimited money of money in politics as long as it’s done independently of party or candidate — has allowed the wealthy to have a disproportionate amount of influence in the electoral process.

“[It] has created an atmosphere in which huge sums of money can be provided by a very small number of people,” he said. “I think 30,000 people will [have supplied] 25 percent of congressional and presidential funding in the last cycle.”

Cockcroft said that a key issue here is how the public perceives this process.

How companies hide their money

It can be quite difficult to determine who actually owns the money in a specific bank account or who’s benefiting from a business transaction. While someone’s name may be attached to property or money, others can still reap the benefits — a concept known as “beneficial ownership.”

Think about the Panama Papers scandal that broke last summer. Documents revealed that high-profile figures all over the world were hiding their money in offshore accounts for purposes like tax evasion.

A similar issue is happening right here in the U.S., Cockcroft said. This includes places like Delaware, Wyoming, Colorado and South Dakota.

In Sioux Falls, South Dakota, trust laws enable families to shelter a lot of income. Assets held in South Dakota trusts in 2006 totaled $33 billion and ballooned to $226 billion in 2014.

The potential for progress

The previous administration had tried to put a stop to the anonymity involved in beneficial ownership — a move in opposition to what the current administration is doing, Cockcroft said.

Earlier in the year, President Trump signed legislation that repealed an anti-corruption measure requiring oil and mining companies to reveal payments made to foreign governments.

“We’re trying to see the end of anonymous regimes which prosper, of course, in offshore centers,” Cockroft said. “But if we see a setback to that, or if the new administration doesn’t pursue it assiduously, that’s very unfortunate for the whole world economy.”

Loans in the balance as international community weighs corruption in Guatemala