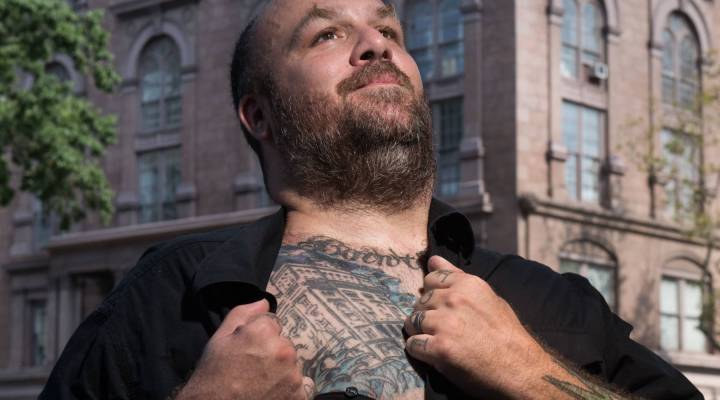 COPY
Mike Essl, a graduate and acting dean of the Cooper Union School of Art, bears a tattoo of the college's iconic Foundation Building. Leo Sorel/Courtesy of The Cooper Union
My Economy

Mike Essl, a graduate and acting dean of the Cooper Union School of Art, bears a tattoo of the college's iconic Foundation Building. Leo Sorel/Courtesy of The Cooper Union
Listen Now

Most of us take free public education for granted, at least through high school. But the idea of free college really gained traction during the election season.

For Mike Essl, not paying for college was life-changing. He’s a 1996 graduate of the Cooper Union in New York City, which — until a couple of years ago — charged no tuition. He’s now acting dean of the art school.

“When you mix up a class of everybody who’s going for free, and they have diverse economic backgrounds and come from diverse places in the United States, there’s a citizenship in the class that I have never seen at another school,” he said. “It was great because we were all there for free, not because I was there for free.”

Unburdened by student loan debt when he graduated, Essl and some friends from Cooper Union founded a graphic design firm.

“We were able to grow that company to a 20-person firm that was billing between $2 and 3 million a year,” he said.

Essl was part of a group that sued Cooper Union after it began charging tuition in 2014, following a financial crisis. Under a legal settlement, the college is working on a plan to once again offer a tuition-free college education for all its students.

“To be honest I’m still shocked and appalled that we are charging tuition,” he said. “I think it’s a complete violation of the founder’s intent, and I think we should be free or die trying.”