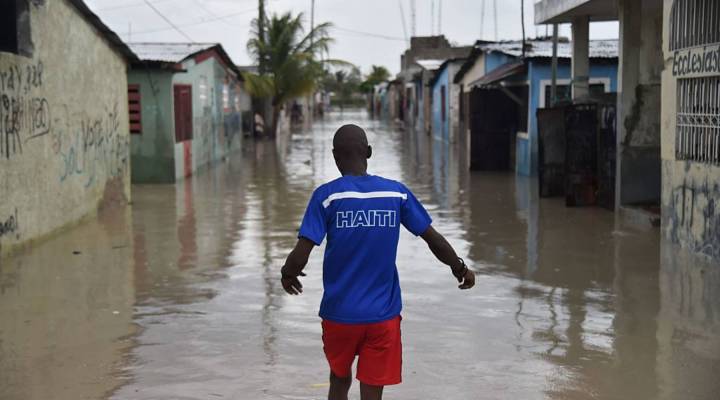 COPY
A man walks down a flooded street, in a neighbourhood of the commune of Cite Soleil, in the Haitian Capital Port-au-Prince. Hurricane Matthew slammed into Haiti, triggering floods and forcing thousands to flee the path of a storm that has already claimed three lives in the poorest country in the Americas. HECTOR RETAMAL/AFP/Getty Images

A man walks down a flooded street, in a neighbourhood of the commune of Cite Soleil, in the Haitian Capital Port-au-Prince. Hurricane Matthew slammed into Haiti, triggering floods and forcing thousands to flee the path of a storm that has already claimed three lives in the poorest country in the Americas. HECTOR RETAMAL/AFP/Getty Images
Listen Now

Hurricane Matthew made landfall in Haiti today. It comes six years after a devastating earthquake in the impoverished country, but there’s still lots of work to be done to repair the country’s infrastructure and economy. So why years later is the country is still so vulnerable to events like this?

Haiti is probably one of the worst places in the world for this kind of a disaster to hit. “Haiti is probably the most extreme example of national vulnerability to a major disaster of any type,” said Irwin Redlener, director of Columbia University’s National Center for Disaster Preparedness.

He said a country with money like the U.S. could, for example, retrofit buildings to withstand disasters. But Haiti is still struggling with basic housing. When the earthquake hit Haiti in 2010, 250,000 houses were destroyed. “There’s lots of people still living in temporary shelters,” Redlener said.

About 55,000 people are still displaced, according to the Interagency Standing Committee, a group that helps coordinate humanitarian assistance. Redlener said there are lots of questions about how billions of dollars promised to Haiti were used. “Many commitments were not actually fulfilled,” he said.

And the dense shacks that have sprouted along the hillsides are vulnerable to rain, according to Hermann Fritz, who teaches engineering at Georgia Tech.  “They’re prone to flooding, prone to mudslides, prone to landslides and so forth,” he said.

Chris Bessey is in Haiti now working for Catholic Relief Services, though not near the area expected to be hardest hit by the hurricane. Bessey said in addition to infrastructure, political issues have slowed the last recovery, “which makes it difficult to move forward with these larger efforts.”

Elections were supposed to take place next week. But that right now is uncertain.