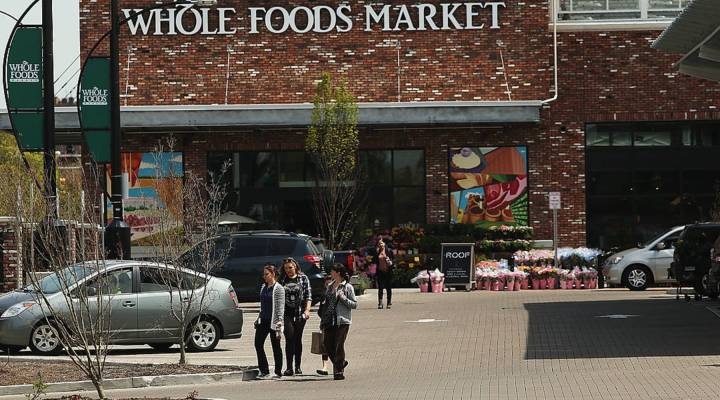 Jordan Buckner grew up on the South Side of Chicago and is creator of Tea Squares, puffed millet-filled bites with raw almonds or pumpkin seeds infused with organic tea powder.

“For me it was important that we actually eat a lot healthier than eating the normal chips and candy that we often eat to kind of get through our day,” Buckner said.

Buckner is one of 35 small South Side businesses featured in a new Whole Foods Englewood store that opened this week.

Englewood is a black, largely low-income community without many healthy food options. Not exactly the typical upmarket Whole Foods demographic. The grocer said its presence is a social mission for healthy eating in this food desert.

The original goal was to bring on 25 new South Side vendors in the store; it got 35 — from pies to prepared food to hair creams.

Whole Foods hired Cecile Carroll-De Mello, a longtime community organizer who’s worked on environmental justice and education issues, to do outreach in Englewood. She was skeptical, at first, about whether the high-end grocer nicknamed “Whole Paycheck” would be affordable for people here. Englewood has a lot of boarded-up buildings and foreclosed homes. Rates of preventable diseases and violence are high.

Jordan Buckner is creator of Tea Squares, a product going on the shelves at Whole Foods in Chicago’s Englewood neighborhood.

The grocer won Carroll-De Mello over.

“One retailer can’t solve unemployment for a community. An aggressive small business strategy can be very beneficial for the neighborhood,” she said.

Walter Robb is the co-CEO of Whole Foods.

“What’s really special here is you realize the impact is actually getting these people in business or helping them grow their business – that’s meaningful,” Robb said. “Because it’s not just the Englewood store; if their product does well, it can go into the other Chicagoland stores. And who knows from there?”

“It’s going to have an effect on this community really because now we’re going to have these small businesses that normally don’t have any place to go and start looking at having places here in Englewood that they can actually do their brick and mortar,” said Glen Fulton, president of the Englewood CDC.

Buckner, 27, benefited from that help. He created Tea Squares just eight months ago when he heard Whole Foods wanted local suppliers at the Englewood location. He also sees the economic value in a beleaguered neighborhood.

In two years he wants the snack to be a six-figure business and he has big dreams about expanding to five full-time employees.

“And then as we begin to grow, in two years, nationwide being able to hire 15, 20, 30 employees to come here that help in the production and sales and have our home base here in Englewood,” Buckner said.

And those jobs would be welcome, because this is a neighborhood with 21 percent unemployment.