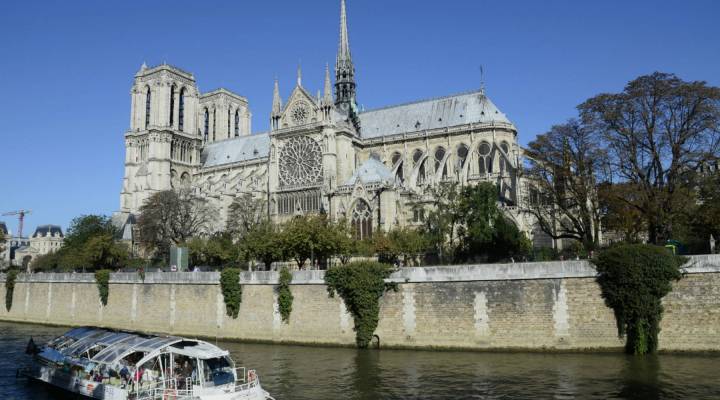 COPY
A view of the Notre Dame Cathedral in Paris. BERTRAND GUAY/AFP/Getty Images

The long vacation season in Europe is winding down, and in  spite of the continent’s well-known problems — the festering debt crisis, the continuing influx of thousands of refugees and migrants across the Mediterranean, and the growing fear of Islamist terrorism —  European tour operators have had another good year.

Foreign holiday bookings are up more than 5 percent. But not every holiday destination is benefiting; there have been winners and losers.

France – one of the most visited countries  in the world – is one of the losers.

In an almost empty restaurant near the Notre Dame Cathedral in the heart of Paris, waiter Yann Lejoie bemoaned the sharp fall in the number of foreign visitors this summer.

“Business is not good this year. Maybe 50 percent down,” he said. He blamed the decline on last November’s terrorist attack on the Bataclan nightclub in which 89 people died.

“After Bataclan, tourists are scared to come to Paris,” he said.

That fear is reflected in overall numbers for the French capital: Tourism revenue for the Paris region alone this year is down almost a billion dollars.

Destinations outside Europe have suffered even more this summer from terrorism. Sean Tipton of the Association of British Travel Agents reels off a grim litany. Turkey: tourism takings down 30 percent. Egypt: a 70 percent fall in business.

The fall is thought to be even steeper in  Tunisia following last year’s beach attack in which tourists were targeted and 38 died.

And the winners in the tourism lottery?

Tipton said business has been booming in those traditional package holiday destinations in Europe that — at the moment —  are  perceived as safe: Spain, Portugal and Greece.

The London market has been very buoyant too, but this may not have much to do with safety. The British  referendum vote in June to leave the European Union, or to “Brexit,” led to a fall of up to 15 percent in  the value of the pound against other major currencies.  That’s drawn more continental Europeans  to London during the peak holiday months of July and August, and Americans who were planning to come anyway have enjoyed a bonus.

“Everything is much cheaper than we expected,” said Joe Harrod from Springfield, Illinois. “The trip has been much easier. We support Brexit!”

American tourist operators in places like Florida  may not share his enthusiasm for the British referendum result. They could be the losers next year.  Two million Brits cross the pond every year to  vacation  in the States, and that vacation has just gotten up to 15 percent dearer. Next year many of those Brits may stay at home.