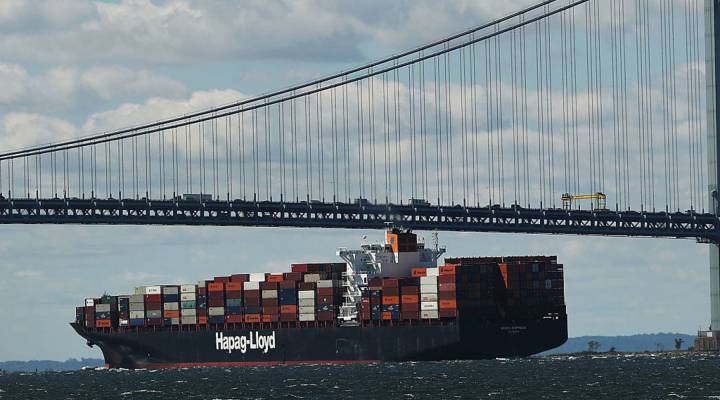 Today a big Korean shipping company called Hanjin declared bankruptcy. It may be far away, but that move is a testament to an industry in trouble.

Volume is way down all over the world as trade remains sluggish. Add to that the fact that just as demand wanes, a whole load of new vessels come online, and there’s a problem.

Shipping hit a crisis in 2008 as demand for goods plunged. It’s never fully returned. John Butler is CEO of the World Shipping Council. He said after the financial crisis, when oil prices were spiking, “There was an expectation that the global economy would come back much more strongly than it did. A lot of companies took what was then a rational decision to build more, larger, newer ships.”

Which ultimately they’ve never filled. So now he said they can’t command their usual shipping rates and they’re suffering.

William Bennett is an analyst with London-based VesselsValues. He sees it a little differently.

“Shipping’s a very weird market compared to anything else,” he said. “They’re very irrational, ship owners.”

He said they’re a competitive lot in the good times — “If you’re building, I will, too.” And now they’re stuck with a glut. He covers the cargo industry and said there are far more ships coming into service this year for dry goods like coal and grain than there is demand for those commodities.

And even though Americans have been shopping lately, imports have fallen here too. Jessica Dankert directs retail operations for the Retail Industry Leaders Association.

“People are spending money but the retailers are trying to find ways to be more effective and efficient in meeting those demands,” she said. “And that results in price pressures across the board including in ocean shipping.”

She said retailers want to do everything they can to make sure unsold inventory doesn’t linger on shelves. And that means ordering less in the first place.