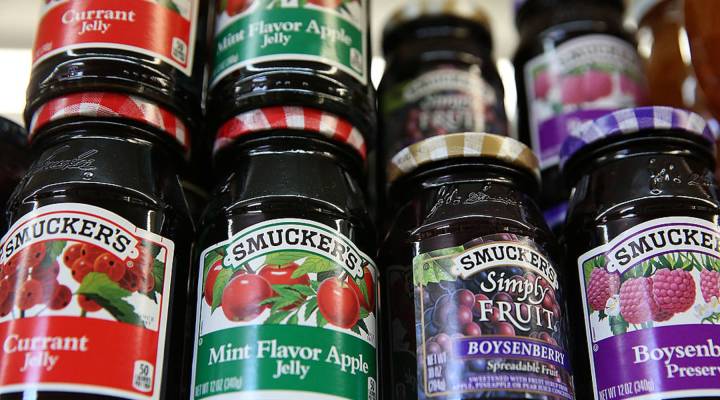 COPY
Companies like jam-maker J.M. Smucker have used a tenure stock-voting structure to reward long-term investors for holding on to their stock. Justin Sullivan/Getty Images
The Price of Profits

Companies like jam-maker J.M. Smucker have used a tenure stock-voting structure to reward long-term investors for holding on to their stock. Justin Sullivan/Getty Images
Listen Now

There is a lot of talk in corporate America about the problem of short-termism. Pressures to make profits right now, this quarter, if necessary at the expense of long-term growth and innovation.

The average stock owner in the 1960s held a share for seven years or so, according to the New York Stock Exchange. Today it’s somewhere around seven months. And the lifespan of the average publicly traded company has fallen this past century from 67 years to just 15, according to a study by Yale management school lecturer Richard Foster.

As a result, there is growing interest in restructuring companies in new ways, to try to bring back some long-term corporate magic. One unusual center for corporate longevity is Orrville, Ohio. Population: 8,300. It’s home to the J.M. Smucker Company, which began churning apple butter in 1897. Back then, farmers from around northeast Ohio came with their fruit to sell.

“I filled my wagon with elderberries and took it down to the Smucker company,” said Bob Hershey, 90, a lifelong Orrville resident who sold his own fruit to Smucker’s as a child.

“They had a great big weighing platform. And they wrote me a check that said: ‘Only 35 cents, Bob.’ I mean, that was a small wagon. Somebody was really being very kind to me.”

For five generations, every CEO of the company has been a man named Smucker. The bosses have been known to walk the factory floor and greet workers by name.

“You know, he’d walk right up to people, and it was like his brother or his son,” said Jerry Demlow, owner of Jerry’s Café in Orrville, referring to past CEO Tim Smucker.

But Smucker is not a typical family company. It began with a dedication to small-town values and a Bible verse on the wall of the founder. It read: “Be not deceived; God is not mocked: for whatsoever a man soweth, that shall he also reap.”

At the same time, Smucker raised money on Wall Street, and has big institutional investors, like Vanguard. It wanted it both ways: to adhere to family tradition and values, and to grow with shareholder investment.

“They’ve been profitable and successful for more than 100 years,” said family business consultant Dennis Jaffe. “That puts them in the 0.1, 0.01 percentile of family businesses.”

To Jaffe, a big key to success is the company’s stock structure: it gives family and friends disproportionate voting power in company decisions. Some call it tenure voting. If you hold onto a share for more than four years, you earn 10 times more votes. This rewards long-term investors and seeks to weed out the make-money-now crowd that might pressure Smucker into certain decisions.

“For example, cutting corners to make a product more profitable,” Jaffe said. “Doing things that are ethically sensitive in order to get shelf representation in grocery stores. This happens more frequently than people would like to admit.”

Only a small number of companies – perhaps fewer than 20 – have tenure voting structures. It has been a formula for steady, boring, and profitable. Tenure voting firms’ stock has significantly outperformed the S&P 500.

Lynne Dallas and Jordan Berry of the San Diego School of Law, in a 2015 paper, found that an investor who put money in an index of tenure-voting companies in 1980 “would have more than six times as much money at the end of 2013 as an investor who invested in the S&P 500.”

Here is a tribute to Smucker’s boring success: over the years the company has acquired Jif peanut butter, Crisco, the pet food firm Big Heart Pet Brands and Folger’s coffee. Yet it’s paid out a dividend to investors every year since 1949, increasing its dividend 15 years in a row.

“They haven’t chased trends, like pre-prepared coffee drinks, the frappucinos and macchiatos and lattes,” said Robyn Bolton of the business consultancy Innosight. “They’ve really stayed steady and true to the core of the brand.”

The Smucker Company declined to comment. There is controversy around tenure voting: favoring long-term investors means discriminating against short-term investors, raising the question of shareholder democracy. It differs from the traditional one-share, one-vote system.

“It’s very dangerous territory when you start treating investors differently,” Mastagni said. “We understand it sort of came from a family-owned business. Once you tap into the capital markets, the economic interests need to match the voting interests.”

Questions of shareholder discrimination led regulators in the 1980s to stop letting companies offer tenure-voting shares, though they did grandfather in firms like Smucker.

Now, though, there is interest in bringing the structure back, from a very different sector from PB&J: Silicon Valley. David Berger, a partner at the powerhouse law firm Wilson, Sonsini, Goodrich and Rosati, argues that patient, tenured shareholders feed innovation. Breakthroughs can take time.

“They may fail – that’s the whole notion of taking a big risk,” Berger said. “Electric cars, whether it’s through the types of moonshot projects that Google is engaged in, you want to be able to ensure that those companies have access to patient capital.”

The issue is, those shoot-the-moon projects, at least measured by entrepreneurs going public, are getting harder to find. The number of publicly traded companies the last two decades has fallen from around 8,000 to fewer than 4,000. One commonly voiced fear of going public is of so-called activist investors: investment funds that buy shares to shake up the board, radically change company strategy or seek “stock buybacks” that spend profits on purchasing shares to boost the price, rather than, say, invest in research.

“They’re asking the companies to take cash and either give a dividend back to shareholders or to do buybacks on stocks,” said venture capitalist Scott Kupor, managing partner of Andreessen Horowitz. “In the tech industry at least, that’s a new phenomenon we hadn’t seen before.”

Tech firms have a couple of options to fend off short-term shareholder pressure. They can go public and give new investors hardly any voting rights, which is something Facebook and Google do. Or they can let shareholders earn voting rights over time, in other words tenured voting, the successful structure employed at Smucker.

In both Orrville, Ohio and Silicon Valley, the point is to stay true to the original vision of the founder, whether it’s apple butter or Apple computers.

See more from our series Price of Profits.