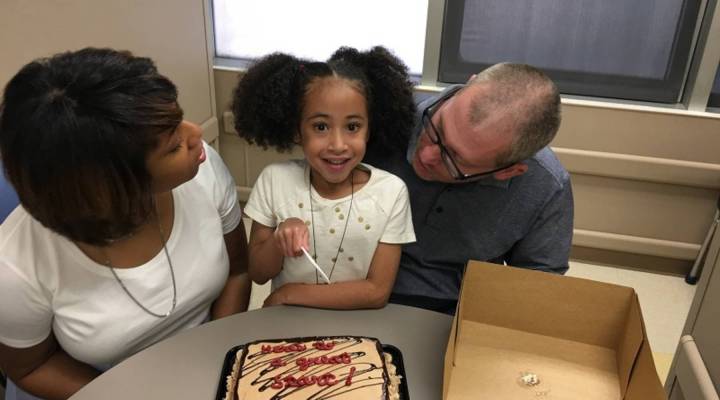 If you want to see where the future of children’s health is headed, you’ll have to look inside Riley Kinman’s stomach.

On a recent visit to the hospital, Riley, who is five years old, swallowed a tiny white pill with an embedded sensor – roughly the size of a grain of sand. When it reached her stomach, it sent a signal to a patch she’s wearing on her skin and alerted her parents and doctors that she’d taken her medication.

Making sure Riley has taken her pills is especially important because she had a kidney transplant earlier this year.

The Proteus Digital health pill, with a sensor that’s ingested. The company is working with Children’s Medical Center in Dallas.

For decades, Children’s Medical Center in Dallas has partnered with academic institutions, working within their own system to come up with ways to care for sick patients. Now, the model is shifting. It’s  investing in tech startups to care for healthy kids.

Children’s hospitals are searching for the best way to monitor patients and keep them out of the ER. Digital health startups are looking for patients to test their products. Julie Hall-Barrow, Senior Director of Healthcare Innovation at Dallas Children’s Medical Center, says keeping kids healthy means finding partners outside of the hospital, in the home, in the school, and with faith-based organizations.

“I think if we weren’t looking at technology to help us do that,” Hall-Barrow said, “we’re never going to move much further.”

The fastest way to move is to connect with startups that already have health products and apps, like Proteus Digital Health, or a Dallas startup called Mend. Mend is an Uber-like service where a caregiver comes to your home or office for a checkup. Children’s Medical Center in Dallas acquired controlling interest in the company in 2015. Pete Perialas, who oversees investments at Children’s, said on-demand health apps like Mend were struggling to please their customers – parents — without help from a larger healthcare network.

“These companies gave them convenience and an app, what we as an industry missed was they also wanted to extend the relationship with their network of caregivers,” Perialas said.

So, Children’s Medical Center brings parents the long-term patient-doctor relationship, and the startup brings the technology. Both could benefit – but Carmen Balber, Executive Director of California-based Consumer Watchdog, says for patients the pairing of tech startups and private hospitals isn’t necessarily ideal.

“When you combine medical privacy, which is so protected at a hospital and tech companies who want to exploit data for maximum profitability, we see real concerns,” she said.

Balber says federal privacy laws don’t automatically apply to third party vendors. Hospitals have to make privacy protections explicit in their partnership agreements. And of course, even if everyone is following the rules, there’s still the risk of a data breach.

“If you have a startup running on the seat of its pants,” Balber asked, “are they investing in the strongest technology to secure patient’s data?”

Still, health care systems across the country are trying this model — funneling money and resources into smaller outside companies. Last year Boston Children’s teamed up with startup accelerator Rock Health to advise companies for the pediatric market. Inova Health System in Virginia launched a hundred million dollar venture fund to help startups get off the ground. And Kaiser Permanente’s venture group invested in StartUp Health.

Unity Stoakes, president of StartUp Health, which invests in and coaches startups, said only a few years ago it would have been almost impossible to get a meeting with some of these top health networks.

“Now you’re seeing some of the leading health care companies not only invest in, but start to commercialize and work with some of these young emerging companies,” Stoakes said.

The payoff for both sides could be big. Think back to that sensor-enabled pill. Children’s Medical Center in Dallas has plans to help manufacture the medication – and potentially make money from it.

The new partnerships will make some people feel safe – like Riley’s parents, who won’t have to worry she’s missed a dose at sleepaway camp – others, nervous about data privacy and ethics. And hospitals?  They could earn a little extra money.