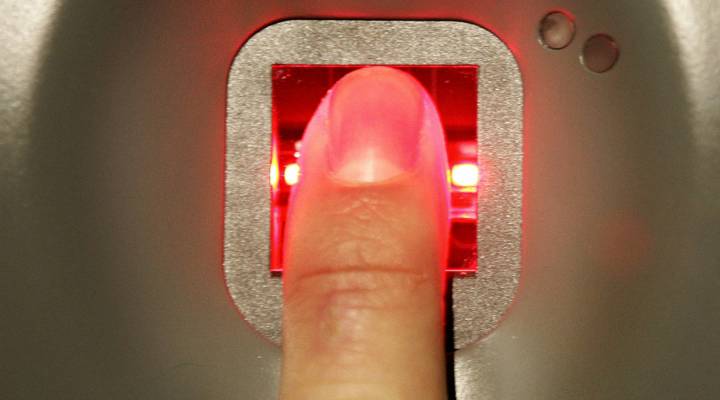 COPY
A man has his fingerprint scanned on an airport biometric check. Fingerprint technology may start becoming a part of your credit card paying routine.  Peter Macdiarmid/Getty Images

A man has his fingerprint scanned on an airport biometric check. Fingerprint technology may start becoming a part of your credit card paying routine.  Peter Macdiarmid/Getty Images
Listen Now

Credit card fraud is growing in the U.S.: 47 percent of the world’s card fraud takes place here. One company wants to help lower those figures with a biometric, fingerprint-activated credit card.

You don’t activate this card by calling a 1-800 number. Instead, you swipe your chosen finger across the card three times. Afterward, every time you use it, you use that same finger to identify yourself. A thief would be stuck with a useless piece of plastic.

Chaya Hendrick is CEO of SmartMetric, the company behind the card.

“We have talks and a very high level of interest underway at the moment from some of the biggest credit card issuers in the United States and in Europe and parts of Asia,” she said.

Ben Woolsey, president of Credit Card Forum, said fingerprint technology would add security in the event of a stolen card. Still, he said most card fraud “is when millions of card numbers and the information associated with those people are stolen off of merchant databases, card processor databases,” and fraudsters then use that to embark on an online spending spree.

He said the tighter security gets around the actual card, the more it’ll drive criminals to go after the data.