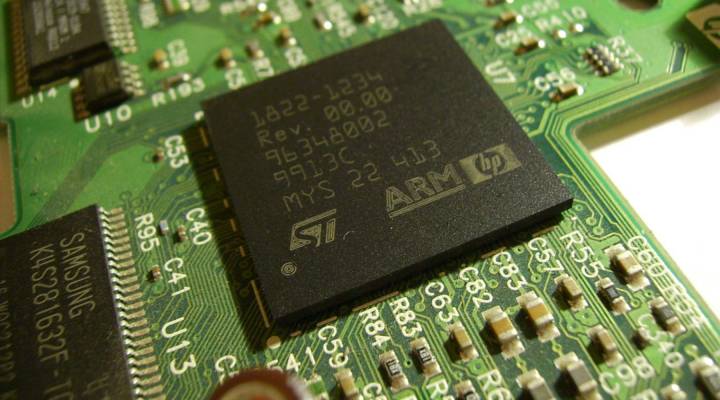 COPY
An ARM processor in a Hewlett-Packard printer. Socram8888/Wikimedia Commons

SoftBank, a Japanese telecommunications firm, is buying the British chip company ARM, which designs tiny processors that go in phones and computers all over the world.

This deal is valued at more than $32 billion, and comes as the British pound is down against the yen.

ARM, which has been around for 25 years, designs and licenses chips, but it doesn’t actually manufacture them. Last year, 15 billion chips were manufactured from ARM designs, and each time those ship out, ARM gets a little royalty.

“It has absolutely been an innovator,” said Chris Green with the U.K. consulting firm Lewis. He said ARM’s high-margin business model has been effective, and it’s also the company that’s made it possible to do stuff like watch streaming video on your phone without draining the battery immediately.

“It has made significant leaps forward ahead of many of its competitors, not only around performance but also around things like power consumption,” he said.

Right now, people know ARM’s microprocessing chips because of smartphones—they are in the majority of the world’s smartphones. But in the near future, companies are hoping we’ll be dealing with microprocessors in everything from air conditioners to cars in an interconnected “internet of things.”

SoftBank is a Japanese telecom conglomerate that’s heavily involved in the Japanese internet industry, and it’s been looking for a splashy acquisition.

“For SoftBank, it’s about having a stake really in the future of the internet of things,” Green said. “This is very much a long-term investment for SoftBank, but it’s an acknowledgement of the importance that chip design is gonna play.”

It also doesn’t hurt that the yen is strong and the pound is weak—thanks, Brexit.

Alicia Ogawa, a senior adviser at the Center of Japanese Economy and Business at Columbia Business School, said Brexit may have sweetened the deal, but it was certainly in the works before the recent drop in the pound.

“Anytime a major economy has a downward shift in the exchange rate, that’s gonna make Japanese companies who are hell-bent on expanding overseas take a look, but I think in the case of the U.K., it depends very much on what kind of industry we’re talking about,” she said.

She said it’s important that ARM does most of its business outside the U.K. and earns much of its income in U.S. dollars.