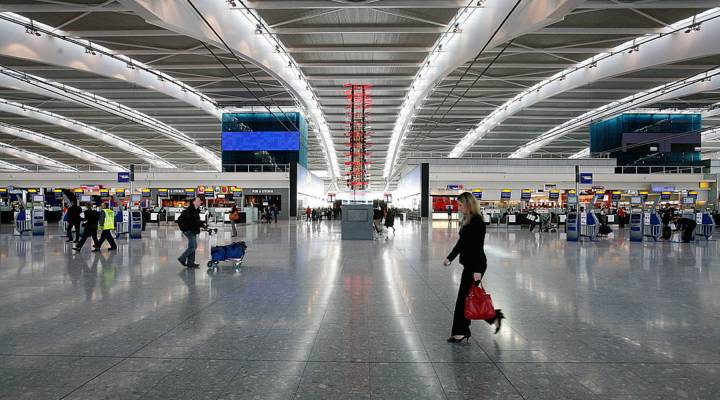 A terminal at Heathrow Airport in London. Cate Gillon/Getty Images

When Britain shocked the world by voting to leave the EU a few weeks ago, we weren’t the only ones thinking about how affordable British vacation might be. Searches for flights to the U.K. spiked across Europe the day after the vote, and flights from the U.S. to London became a real bargain.

But the Brexit market turmoil doesn’t just mean a cheap vacation. If you’re going at the right time, Americans can make real money off the cheap pound.

Take Cameron Pfiffer. He’s headed to the University of Reading this fall to get his graduate degree in corporate finance. The day of the referendum, he panicked and shot off an email asking if his scholarship paid out in dollars or pounds. After watching the pound fall to a 30-year low, he finally heard back: the scholarship was in dollars, tied to cost of living estimates with the pre-Brexit exchange rate.

“If this rate stays the same through early September, my wife and I will have made 4400 pounds or $5,700,” he said, laughing. “I don’t know that I’ve ever had that much money, ever, at once in a bank account. So I’m really, really excited.”

Now Pfiffer says he and his wife are looking at nicer apartments. She’s finishing up her degree online from the U.K. and her scholarship is in dollars too. She even brought home an Ikea catalog they’ve been leafing through, in hopes of furnishing their dream home.

Pfiffer said he plans to get off the currency roller coaster and exchange his scholarship money for pounds as soon as he gets to Reading. It’s possible, if unlikely, that the pound could recover so much that the couple actually loses money, but Pfiffer says he’s not worried. He’s actually excited, and he has an academic interest to see how London and its financial sector respond to Brexit.

“I picked Reading because it was close to London, ironically…the financial hub of the world,” he said. “At least I’ll be there to watch the house burn down, you know? Barn fires are kind of fun.”

For Christina Farr, it’s more bittersweet. She’s a duel citizen, a health reporter who’s lived in the U.S. for six years. She says many of her British friends were just getting on their feet post-recession when the referendum happened.

“People kind of felt like they already had a late start in their career, a lot of my friends still live at home, they can’t afford an apartment in London,” she said. “A lot of people felt like their future had been compromised, and that decision was made by people who were a lot older, primarily.”

Amid all that uncertainty, Farr noticed flights to Britain were nearly half what they are normally, so she booked a trip. It was “the only silver lining” to a disappointing vote, she said.

As a child, Farr said she loved to shop during trips to the U.S. — the exchange rate meant better deals on certain brands. Her friends would ask her to bring back stuff from Abercrombie & Fitch. These days, Farr said she usually never shops when she’s back in London, except for things she can’t find in America. She stocks up on little pots of flavored Vaseline and chocolate covered rice cakes from Holland and Barrett. Now that her dollar stretches further she’ll do some more shopping, she said.

Of course, while American dollars go a lot further in the U.K. — Vox says the only better-deal destinations are South Africa and Mexico — the reverse is true too.

Natalie Spanier, a television producer in London, has been planning a huge family trip to America for about a year. They’ll meet up with family in San Francisco this summer and visit Yosemite, Las Vegas, the Grand Canyon and Los Angeles.

Spanier said they’d already booked most of the trip, including a cabin at Yosemite and a nice hotel in Vegas, before the Brexit vote. Now they’re cutting back slightly as they plan their final Southern California leg. That means an Airbnb instead of a hotel, and downgrading their accommodations around Disneyland. Spanier said they’re not letting it ruin the trip, however.

“Brexit or no Brexit, exchange rate or no, it was always going to be a really expensive holiday,” she said. “We’re still going to do our helicopter tour of the grand canyon. We’re not going to give that up because when are we ever going to do that again?”