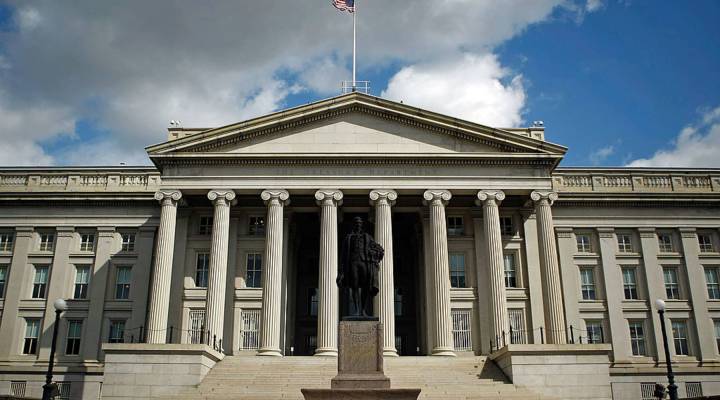 A statue of the first United States Secretary of the Treasury Alexander Hamilton stands in front of the U.S. Treasury. Negative yields overseas may be pushing investors toward Treasury bonds. Chip Somodevilla/Getty Images

A statue of the first United States Secretary of the Treasury Alexander Hamilton stands in front of the U.S. Treasury. Negative yields overseas may be pushing investors toward Treasury bonds. Chip Somodevilla/Getty Images

Germany’s historic sale of 10-year bonds at a negative yield Wednesday reflects the economic turmoil in Europe and elsewhere, but it could also stimulate demand for U.S. treasuries.

Government bonds are considered safe investments because they are backed by a government. When an investor buys one of these bonds, the investor is essentially lending a country money. But when yields go negative, it means investors end up paying more for the bond than they receive when it matures.

Germany is the first of the Eurozone countries sell a negative-yield bonds, though Japan and Switzerland have also issued the notes. The growing presence of negative yields in bonds overseas means investors will likely look to the U.S. instead.

“Investors will naturally gravitate toward investments that would appear to offer some better value,” said Brian Rehling, co-head of global fixed income strategy at the Wells Fargo Investment Institute. When demand increases for bonds, prices rise. And when prices rise, yields fall. “That’s one of the reasons that you see Treasury rates are held so low here.”

Because, while U.S. Treasury yields are actually at historic lows, they’re at least in positive territory.

“The longer they stay down here and the lower they go, then you would expect other rates to follow,” he said.

But Wednesday’s sale won’t have an immediate impact on rates given that Germany’s negative yields are no surprise, Riehling said.

“It’s a confirmation of  what we’ve already been seeing, “ he said.

The yields on Germany’s bonds dipped below zero for the first time in June, with many citing uncertainty around the Brexit vote as the culprit for the drop. Bond yields, or the amount of return for investors, have actually been falling globally during the past year. The Japanese government made a similar sale in March.

For U.S. investors, this also means paying attention to what’s happening in their portfolio. For example, some investment funds may include some of these bonds.

“Your average investor is unlikely to buy a piece of paper that has a negative yield on it. It doesn’t make a lot of sense,” Rehling said. But you may own funds that invest in them. “You absolutely could end up owning some of these bonds without knowing you own it,” he said.

Why junk bonds are back in vogue