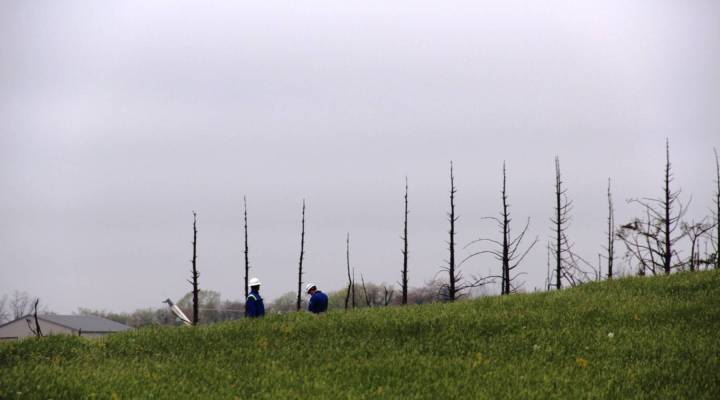 COPY
Investigators on the scene of an April 29, 2016 Pipeline Explosion that badly burned a 26-year-old man in Salem Township, Pennsylvania. REID R. FRAZIER

A tornado, a giant storm, an airplane crashing. That’s how neighbors describe the sound of the explosion that took place at 8:13 a.m. on April 29, in a field in Salem Township, Pennsylvania, about 30 miles east of Pittsburgh.

“The noise was so loud — it was sickening,” Dave Alund said. “All the oxygen rushing — it consumed all the oxygen around here — you had a devil of a time  breathing.”

Dave Alund has lived down the road from where the blast occurred for the last seven years. Despite the intensity of the blast, which sent one man to the hospital and destroyed his home, Alund says it doesn’t make him worry about the potential for other mishaps with pipelines in the area.

“They’re constantly putting in pipelines. And they’re relatively safe. There’s a lot worse things to worry about than gas explosions,” he said.

Investigators released a preliminary report that said corrosion along a weld in the 30-inch pipeline may have caused the blast.

“We hope that if there are lessons to be learned, the entire industry can use them to make the nation’s pipeline system even safer,” Cathy Landry said, a spokeswoman for the Interstate Natural Gas Association of America, a pipeline industry trade group, via email.

“Nearly 100 percent (99.999997 percent to be exact) of the natural gas transported by pipeline was delivered without incident last year.  Our industry is committed to the goal of zero incidents, and we are working every day in pursuit of that goal.”

The pipeline is part of the Texas Eastern Transmission line, a 9,000 mile system of pipes that transports natural gas north from the Gulf Coast to the Eastern Seaboard.

A pipeline explosion leveled a house in Salem Township, Pennsylvania.

And the Texas Eastern Pipeline is like an Interstate Highway.

McCown says 2.6 million miles of pipelines around the country carry oil and gas every day, almost always without incident.

“It’s about managing risk,” McCown said. “To the extent that pipelines aren’t used, then other forms are used and they’re frankly far more dangerous.”

But accidents do happen. Over the past decade, there’ve been more than 300 serious incidents involving pipelines resulting in 132 deaths, according to data compiled by PMHSA. And these can often take place close to where people live. In fact there’s no minimal setback for pipelines from homes and buildings established by the federal government, according to Rebecca Craven of the watchdog Pipeline Safety Trust.

“There are situations where new pipelines are going through, and even with the ability to move away from a house or a group of houses, they are choosing to run a straight line and go close to those houses simply because it’s cheaper.”

The explosion in Salem Township, about 30 miles east of Pittsburgh, took place 200 yards behind a house. A man in the house, identified as 26-year-old James Baker, fled the home, just before it was engulfed in flames. He suffered third degree burns on three-quarters of his body and was picked up by a neighbor who’d driven up in his truck.

The explosion was heard two miles away by Dean Law. He initially thought it was a nearby compressor station letting gas out of its pipes.

Dawn Law and her father, Dean Law, of Salem Township, on a right-of-way Sunoco Logistics is planning to build a few feet from her front door.

“Then it kept goin’, I said that doesn’t sound right to me.”

For the last two and a half years, Law had been fighting a pipeline company, Sunoco Logistics, about putting a pipeline on his property. He finally agreed to accept the company’s offer this year after Sunoco threatened to use eminent domain. But he’s not happy about it.

Among his main concerns is that the pipeline cuts through a mobile home park he built on his property — and will pass a few feet from the houses of his tenants. One of those is his daughter, Dawn Law.

The right of way follows an older pipeline that was built in the 1930s on the land. The new pipeline will go right by Dawn’s front door. The recent explosion has her worried for her own safety, in the unlikely event of a similar explosion.

“Living this close to it? What chance do you have? You don’t have a chance,” she said.

Dean Law doubts that’ll ever happen on his property. But he says the more pipelines there are, the more chances there can be for another explosion. And with the current drilling boom, he sees more pipelines in the future.