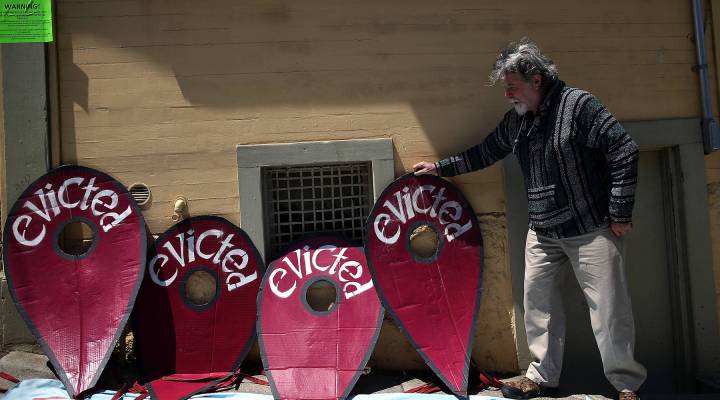 COPY
A protester props up a sign during a demonstration outside of an apartment building that allegedly evicted all of the tenants to convert the units to AirBnb rentals on July 29, 2014 in San Francisco, California. Justin Sullivan/Getty Images

A protester props up a sign during a demonstration outside of an apartment building that allegedly evicted all of the tenants to convert the units to AirBnb rentals on July 29, 2014 in San Francisco, California. Justin Sullivan/Getty Images
Listen Now

Airbnb is suing San Francisco in Federal court over a new ordinance under which the city can sue the company for listing unregistered apartment rentals. The ordinance could cost Airbnb $1,000 a day for every day a nonconforming listing is up. Airbnb says it is just the platform and therefore not legally responsible for the posting of its users, or whether the content is its business.

At the core of the case is the Communications Decency Act, which bars the government from holding internet sites responsible for the content created by their users. Airbnb claims it is just a platform and protected under the CDA. The City of San Francisco disagrees.

Here is the new process to register your Airbnb in San Francisco. pic.twitter.com/KYFBo1loyx

“What we’re saying is the only way to enforce this law is to inject corporate responsibility into in by fining the hosting platform,” says David Campos, who is on the San Francisco Board of Supervisors and is the main author of the new ordinance.

Proving that it believes it’s above the law @Airbnb sues SF to block new law from going into effect. @Airbnb wants to play by its own rules.

There are thousands of Airbnb rental units in the city, and as many as 80 percent aren’t registered. Asking Airbnb to ensure they are registered is no different than renting a car, Campos said.

“Before Hertz can rent you a car, it has to check that you have a driver’s license,” he said.

But Airbnb isn’t renting cars. Nor is it just a few people buying classified ads to rent out extra rooms.

Everyone hates the process of registering their Airbnb: boohoo, so hard to make a shit ton of money in #SF ??? #fairbnb

“That’s not very disruptive to anyone, to any status quo,” said Andrew McAfee, co-founder of MIT’s Initiative on the Digital Economy. “Probably not going to attract the attention of regulators in the city.”

“These are significant businesses, and they’re reshaping cities and reshaping industries and economies,” he said.

McAfee said the court ruling will probably set a precedent for other cities, and could pave the way for more legal battles.

Have you seen what the STR violation letter looks like? Enforcement in SF is real. Register today! pic.twitter.com/0vDkIhlNon