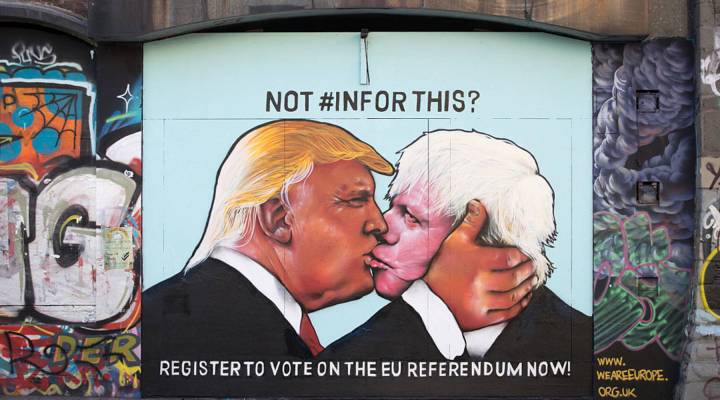 COPY
A mural depicting US presidential hopeful Donald Trump sharing a kiss with former London Mayor Boris Johnson captured last month in Bristol, England. Johnson  and Trump are both supporters of Britain leaving the European Union. The nation will now start the long process of splitting off from the political-economic zone. Matt Cardy/Getty Images
Brexit

A mural depicting US presidential hopeful Donald Trump sharing a kiss with former London Mayor Boris Johnson captured last month in Bristol, England. Johnson  and Trump are both supporters of Britain leaving the European Union. The nation will now start the long process of splitting off from the political-economic zone. Matt Cardy/Getty Images
Listen Now

Despite the drama of the Brexit vote, there are no instant implications. It’s as if a couple has announced to divorce, but for now no one is moving anywhere. The British retain their EU membership until the process ushers them formally out.

“There’s no legal way for the U.K. to start stopping, for example, somebody from Poland who has just arrived today,” said Derrick Wyatt, emeritus professor of law at Oxford University. “And by the same token, British goods, British banking services are being marketed all over Europe today.”

In the next few months, the expectation is that London will invoke what’s known as Article 50, a clause in the European Union charter that begins formal exit talks. It’s effectively the filing of divorce papers, which starts a countdown.

Within two years, the U.K. and EU need a deal on the divorce terms, and there is a multitude of questions:

What happens to cross-border banks?

Can Brits in continental Europe stay on? Can Poles or Italians in the U.K.?

Barrett and others said it’s likely existing cross-border workers will be grandfathered, particularly those who have been doing it for many years. In fact, despite the rhetoric of separation, the EU and the U.K. could choose to keep a lot of the old links in place.

They’ve had, after all, a long and entangling economic alliance.

“It’s a bit like the Eagles’  ‘Hotel California’: You can check out any time you like, but you can never really leave,’” said Tim Oliver, fellow at the London School of Economics. “The EU is not something that you can just pick yourself up from and leave very quickly.”

If the full two years pass without a deal, the U.K. is automatically booted from the EU club.