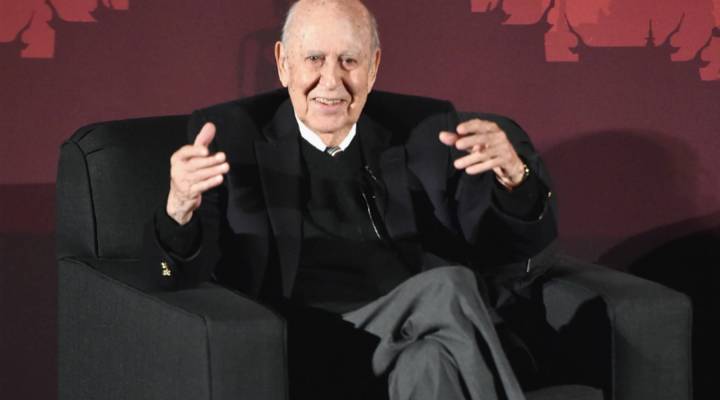 Update (June 30, 2020): Carl Reiner, the ingenious and versatile writer, actor and director who broke through as a “second banana” to Sid Caesar and rose to comedy’s front ranks as creator of “The Dick Van Dyke Show” and straight man to Mel Brooks’ “2000 Year Old Man,” has died. He was 98.

David Brancaccio visited him at his house in Beverly Hills in June 2016.

You can hear their conversation by clicking on the audio player above, and read more about it below.

Carl Reiner, the 94-year-old legendary comedian and actor, is still hard at it as a multimedia entrepreneur.

Reiner created “The Dick Van Dyke Show,” one of the greatest television comedies of all time. He’s also a mentor to essentially everybody in comedy, from Jerry Seinfeld to Billy Crystal.

I visited him the other day as he was working on his next digital-meets-publishing extravaganza, where he takes the intellectual property he owns; engages his flawless, detailed memory; and creates books and other multimedia creations to sell as partner in a venture called RandomContent.com.