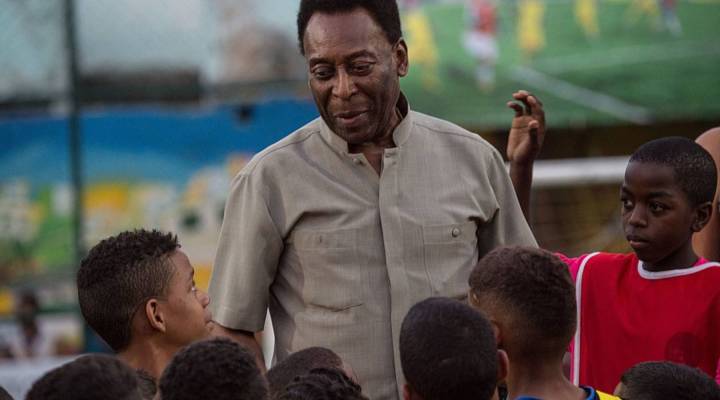 Former soccer player Pele speaks with children in Rio de Janeiro, Brazil, in 2014. The athlete's auction of memorabilia begins today and a portion of the proceeds will go to a children's hospital in Brazil. YASUYOSHI CHIBA/AFP/Getty Images

Former soccer player Pele speaks with children in Rio de Janeiro, Brazil, in 2014. The athlete's auction of memorabilia begins today and a portion of the proceeds will go to a children's hospital in Brazil. YASUYOSHI CHIBA/AFP/Getty Images

The auction of Brazilian soccer star Pele’s personal collection of soccer gear and awards started off with a big sale Tuesday — the boots he wore in a 1981 film sold for more than $9,000, the BBC reported.

Pele wore the boots, which fetched about $9,113 at an auction in Los Angeles, in the movie “Escape to Victory,” known as “Victory” in North America. It featured Sylvester Stallone and Sir Michael Caine.

For the next three days, the 75-year-old retired athlete is selling more than 2,000 pieces of his soccer memorabilia, including shirts, medals and awards. He is donating a portion of the proceeds to Pequeno Principe, the largest children’s hospital in Brazil, according to CNN.

While Pele has been a longtime star in the world of soccer, the sport in general has gained popularity in the U.S. in recent years with millennial fans leading the push. FIFA, the international organization who runs the World Cup, made $2.2 billion off the games, which generated $4.8 billion in revenue, in 2014. But that money has also come with some problems connected to allegations of corruption within the ranks of the FIFA. It’s an image the soccer organization is working to repair.