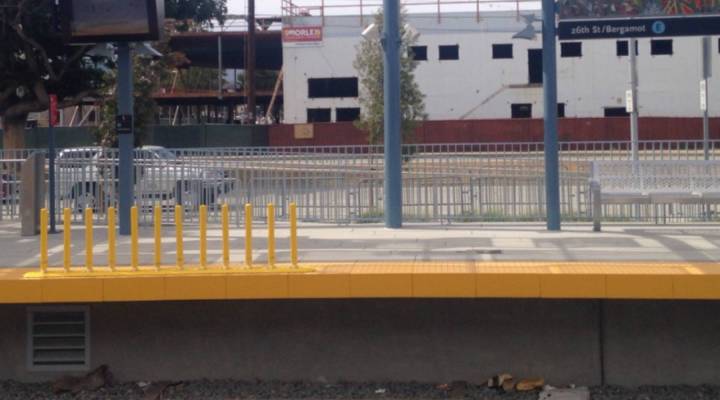 COPY
A view of a light-rail station in Santa Monica, California. Lisa Napoli

The dreaded morning commute. In order to combat traffic, U.S. cities over the last several years have invested $25 billion in light-rail projects.

In one of the most congested regions in America — Los Angeles — one of those new lines has finally been completed. But, when the train rolls in, so does change.

As the train on the new Expo Line barreled into Santa Monica on its first day, Robert Berman sat in his art gallery, worrying.

His is one of 30 galleries in old industrial buildings adjacent to one of the stops: Bergamot Station.  The lease on this Arts Complex runs out next year — and no one knows what’s next.

Gallery owner Robert Berman has been a tenant at Bergamot since it opened as an arts facility. He’s worried about what development will do to the community.

Everyone here in this scrappy arts community knew this wouldn’t last forever. The city of Santa Monica bought these five acres back in 1989. The galleries were meant to be placeholders … until the train rolled in.

Now that day has come.

Jason Harris of the Santa Monica Economic Development Department is faced with a thorny, unresolved challenge: how to work with the developer to generate more revenue for the city without destroying the arts community.

The light rail has already affected the arts complex; one of the structures, which housed two galleries, was destroyed in 2012 to make way for the station.

“It’s been a huge success.  But we are interested in how to try to produce additional revenue,” Harris said. “We envision the possibility of a small boutique hotel being added to the site, and additional amenities, bar and restaurant services.”

Lots of market-rate office space, too. All that means more parking, but where to put it?

One thing is certain: The below-market rent paid by galleries only generates half a million dollars a year for the city, far below what the land could command.

Berman and others here have joined together to appeal to the city: Ditch the developer, and let them take charge of the community.

But with 45,000 people expected to ride the train each day through this prime parcel just a mile from the beach, the idea of preserving this arts utopia may have left the station.