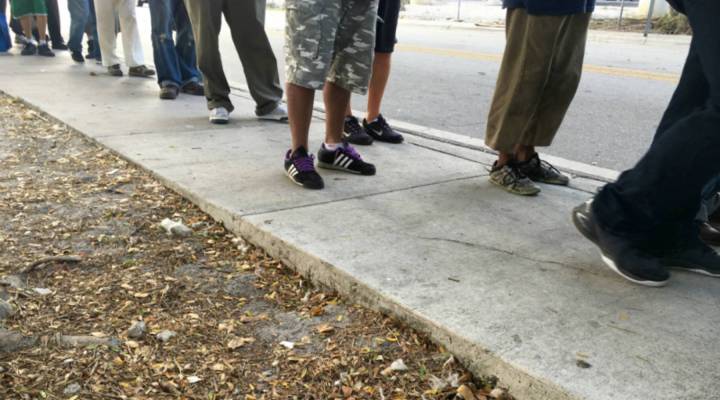 COPY
Homeless people line up for food given out by a church group in downtown Miami. Wilson Sayre/WLRN

Homeless people line up for food given out by a church group in downtown Miami. Wilson Sayre/WLRN
Listen Now

During the recession, it was easier to get food stamps if you needed them. But now that the economy is improving, it’s becoming harder because certain states like Florida, Alabama and South Carolina are again requiring people to show that they’re working.

In Florida, the rollout of those requirements has caused hardship for a lot of people like Lucy Perry, who sleeps every night on the sidewalks of downtown Miami.

For years, Perry got $194 in food stamps per month, the highest amount allowed under the program called SNAP or Supplemental Nutrition Assistance Program.

Lucy Perry, left, and William Royal both lost their food stamps. With the help of a lawyer, their assistance has been reinstated.

But in March that help stopped coming.

“Now, I’m having to go out here and ask people for help just to eat,” Perry said. “That’s embarrassing as hell. I hate it. I hate being out here.”

A total of 350,000 people in Florida have lost their food stamps since the restoration of work requirements on Jan. 1.

“I saw an email about [work requirements] and I was like ‘Oh,’” said Liam McGivern, an attorney with Legal Services of Greater Miami who represents Perry and other people in her situation pro bono. “Then, when I started looking into it, I was like, ‘Oh this is going to be a real mess.’”

What happened was letters went out to places like homeless shelters explaining benefits were now tied to work requirements. But a lot of people said they didn’t get the letters.

People who did had the option of sending in a doctor’s note showing they were unable to work. But many didn’t have doctors — let alone notes.

That’s where McGivern got involved.

“I mean … we’re talking about $194 in food stamps,” McGivern said. “You have legal services attorneys involved just to get a note from a doctor to an agency saying that a homeless person is too disabled to work.”

About 800 people live on the streets in the Miami area; many of them have lost their food stamps.

The Florida Department of Children and Families, which administers the program, declined several requests for an interview. The agency sent a written statement saying it properly notified people of the coming changes back in December, and anyone who thinks they should be exempt from the work requirements should contact the agency.

McGivern says this has all led to a really dire situation.

“It’s terrible to get a call from a desperate person being, like, I literally have no money for food. It’s terrible,” he said.

McGivern managed to help Perry get her food stamps back, but he is continuing to push forward with a challenge of the state’s implementation of the work requirements, using Lucy Perry as a test case.