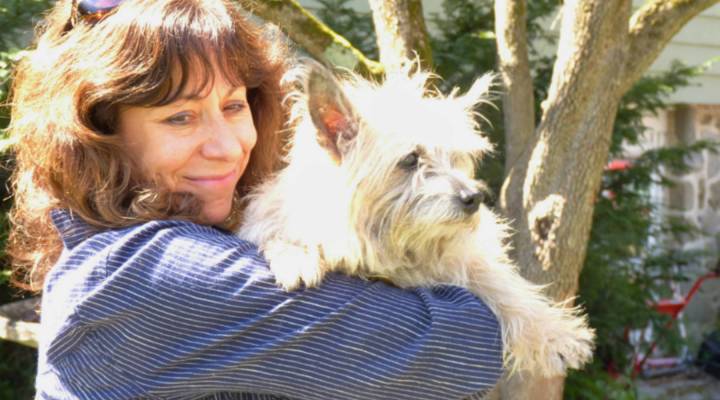 COPY
Suki, a 15-year old Cairn terrier, enjoys a little sunshine and a patch of green. Her owners are choosing pet hospice and palliative care as her health declines. Todd Bookman/WHYY

Suki, a 15-year old Cairn terrier, enjoys a little sunshine and a patch of green. Her owners are choosing pet hospice and palliative care as her health declines. Todd Bookman/WHYY
Listen Now

Paul Rozin has seen lots of dogs come and go during his 79 years. Suki, you get the sense, wouldn’t make his Hall of Fame.

“Among the dogs I’ve had,” Rozin said, “I would say she’s less than average in intelligence.”

But it seems what she lacks in brains, the shaggy white Cairn terrier more than makes up for in loyalty.

“She’s been a good companion and she’s surprisingly young. I mean, if you look at her, you wouldn’t think she was 15 years old. She’s pretty active,” he said.

Suki is starting to show her years in other ways, though. She has developed a heart murmur and arthritis in her back legs, and she has started leaving unwanted puddles around the house.

That has in part prompted a home visit from Tam Mengine, who runs White Whiskers Vet in the Philadelphia suburbs. She is one of a fast growing number of veterinarians who specialize in end-of-life and hospice care, avoiding aggressive treatments and instead focusing on managing symptoms and reducing an animal’s pain or anxiety.

“Maybe they are sniffing the smells on the porch and watching the birds instead of chasing them through the woods, they are still happy,” Mengine said. “So why not let them have that joy?”

But the pet hospice concept is also aimed at owners. It helps them avoid hard decisions about expensive treatments, and, when the time comes, choose in-home euthanasia.

Launched in 2009, the company now operates a network of 80 vets who did more than 15,000 home visits last year. Their clients do pay a premium: in-home euthanasia runs about $250, more than many clinics charge.

Suki, though, isn’t quite there yet. Her vet suggests  that Paul Rozin start her on a joint supplement for the arthritis, and continue monitoring the bladder issues.

Rozin is also going to enjoy the time they have left together.

“I give her more treats than I used to,” he said.  “She likes the dried chicken. I used to give her one or two, but now I really spoil her. I mean, what the hell. That’s one of the things she really loves.”