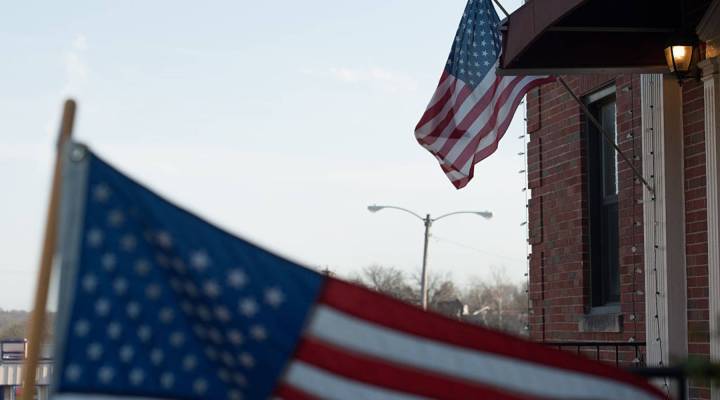 COPY
US flags fly outside a polling station during Missouri primary voting at the First Baptist Church of Ferguson on March 15. Changes in campaign finance law means bigger contributions. MICHAEL B. THOMAS/AFP/Getty Images

This presidential campaign has already broken records for the amount raised since the primaries started, on the path to the White House, and there are still months to go before voters head to the polls in November.

According to the Center for Responsive Politics, candidates have raised about $791 million so far, and the super PACS supporting them have brought in $462 million. While super PACS can accept and spend unlimited amounts of money, individuals have limits to how much they can give directly to a campaign.

But another tool in the candidate fundraising toolbox is a structure that’s getting more attention as likely party nominees become apparent—Joint Fundraising Committees. These committees reflect deals between candidates, their national parties, and state parties that choose to join.

Frank Donatelli worked for the Republican National Committee in 2008, coordinating joint fundraising for the McCain campaign. He said, from a fundraising perspective, joint committees are great.

“You can go to large donors and say, look, we’re not going to have multiple entities hitting you up for money,” said Donatelli, who is now a political consultant at McGuireWoods.

“All it does is take the legal amounts that can be independently donated to all these entities, and they are just added together and you have one total,” he said. “So a wealthy donor can write one check rather than three or four or five. So it’s really a device for convenience.”

With a joint fundraising committee, the maximum allowed donations for the candidate, the party, the convention and multiple state parties can be rolled into one check. Each of the entities involved gets a portion of the money based on whatever arrangement they make, up to the maximum donation allowed by law.

“Everybody has to make their own judgment whether or not there’s too much money in politics, and whether donors should be allowed to write such large checks,” Donatelli said about the hundreds of thousands individuals who can donate under such arrangements. “But that’s the law as interpreted by the Supreme Court.”

It used to be that there was  a maximum each person could donate in an election cycle, regardless of how it was distributed.  So even if donations were spread across a presidential campaign, the national party, and 8 state parties, for example, there was still an overall limit. But, in 2014, the Supreme Court said those “aggregate limits” were unconstitutional.

Tara Malloy, deputy executive director of the Campaign Legal Center warned back then that lifting those limits would create an easy path around campaign contribution caps.

“Sometimes you’d like to say ‘I told you so,’” Malloy said. “But here it’s a bittersweet thing to have to say.”

According to Malloy, what she and the Campaign Legal Center warned would happen, is happening.

“The aggregate amounts are given to all the different groups and then simply transferred back,” she said. “Often to the big party committees, the RNC or the DNC, which then use it for the headlining presidential candidate.”

Now, technically this doesn’t break the law— the money is going to the joint fundraising committees and the committees are, in theory, distributing it to the states involved. But there’s nothing to stop those states from transferring the money back to the national party, which can use it to promote the nominee.

Michael Malbin is executive director of the Campaign Finance Institute, and said there is a lot of that kind of transferring going on.

“It’s not radically different from what happened in [the 2012 election] in structure,” he said, “but it’s quite a bit different in amounts and the size of the numbers” due to the removal of the cap on aggregate spending.

Malbin said under the current setup, an individual donor can give half a million dollars to a joint fundraising committee, and that number could go up, depending on how many state parties get on board with the Republican or Democratic national joint committees.

“That’s just directly to the parties and the candidates,” he said. “This doesn’t begin to address the fact that they can give unlimited amounts to super PACS.”

According to Malbin’s research, the same amount of money raised from a hundred thousand or so “major donors” in previous campaigns now comes from about 200 donors.

“Two hundred donors are being as important proportionally as the top 80 or a hundred thousand only two elections ago,” said Malbin.

So effectively, there’s no limit to how much money an individual can give to influence a presidential campaign.