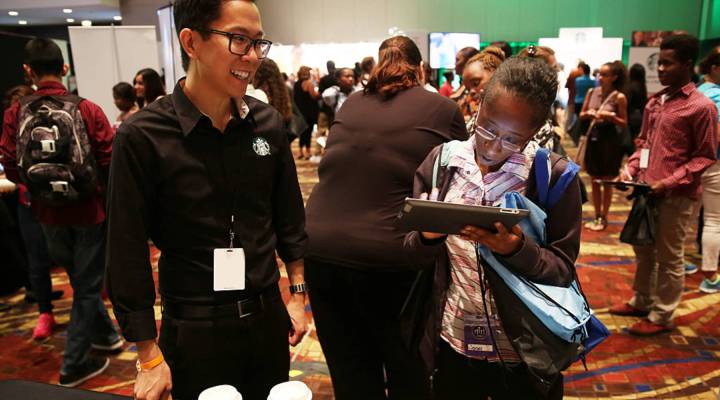 A youth person fills out job applications at the Opportunity Fair and Forum in Chicago on Aug. 13 in Chicago, Illinois. A new study shows that teen unemployment rates may reflect a bigger issue. Tasos Katopodis/Getty Images for 100,000 Opportunities Initiative

A youth person fills out job applications at the Opportunity Fair and Forum in Chicago on Aug. 13 in Chicago, Illinois. A new study shows that teen unemployment rates may reflect a bigger issue. Tasos Katopodis/Getty Images for 100,000 Opportunities Initiative

About 3 million young people — mostly black and Latino youths — are neither working nor in school, reflecting a larger issue of access to education and job preparation, according to a study released Tuesday from research nonprofit Brookings.

These “disconnected” youth, as the study calls them, include those who might not have access to jobs or are working for pay under the table. When Brookings broke the numbers down by race, other themes emerged. White youth and adults are more likely to work than black and Latino youth and adults, and Asians bucked one trend entirely.

Martha Ross, a Brookings Fellow and the study’s author, said the disparity between racial groups and education levels show that access to a traditional career path is limited.

The study looked at young people ages 16 to 19 and 20 to 24, and then compared their employment status to adults aged 24 to 54. It also factored in education levels, race, location and the effects of poverty. The numbers illustrate that when you start working as a teenager, you are more likely to continue working as an adult, unless you are Asian. This community has more youth who are not employed but go to school, and still end up with high percentages of employment when they are adults.

Location also determines how much disparity there is for people of color versus whites, according to the study. For example, young black adults in Houston are 1.75 times as likely to be disconnected from the work force as young white adults. In Chicago, the figure balloons to nearly 7 times as likely.

This is likely due to the level of segregation between races within certain communities, Ross said, causing a lack of resources within one geographic area that may also serve as a boundary for a racial community.

“If you’re in an area where there’s a good school, where there’s a lot of employed adults, you have a network of adults who have a bachelor’s degree or have accomplished an apprenticeship, they can give you guidance,” she said. But, if there isn’t that network, that’s when you have the opposite effect.

But the biggest gap was around education levels. If you have a bachelor’s degree, you are 20 to 25 percentage points more likely to have a job than someone who only has a high school degree.

This could prove that education is key to social mobility, or is “a lever for change,” Ross said.

“That doesn’t mean education that we’ve always done it, with the world of school and the world of work very disconnected,” she said. “If you think of high school, it is pretty self enclosed and the main purpose is getting you read for college. But there’s almost no structured pathways into the job markets.”

Ross said it’s up to educational institutions to broaden what we think of as educational goals, and those should include employment as well as teaching students to think critically and excel academically. A big part of this is departing from the idea that four-year college degrees are the only viable option because not everyone can.

“We’re dealing with this legacy discrimination and tracking. You were assigned when you are in high school — are you college prep material or not? And way too often, it is the poor and kids of color who are labeled ‘not college material,’” Ross said. “Until the privileged white kids, or privileged kids of any color, see options to the 4-year residential experience as desirable, I think that 4-year residential experience is going to be the aspirational norm.”

As Ross’ study shows, if you don’t reach this current aspiration norm, you’re not likely to see another forward, which means you could end up not working at all.