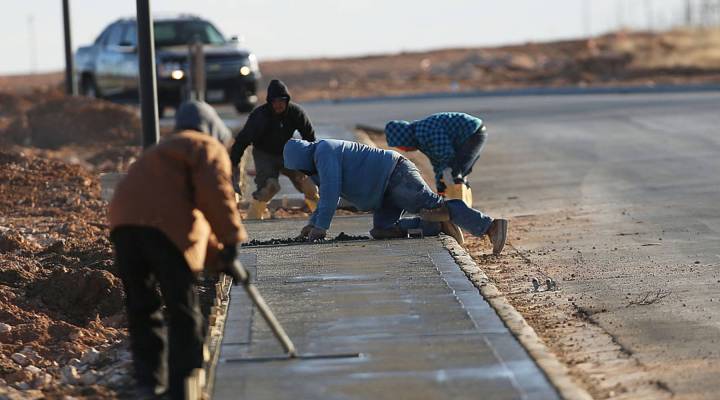 Twenty thousand workers have been laid off this year in the oil and gas industry across the country as the price of oil has slumped. The cutbacks are especially hard for foreign workers here on what are known as H-1B visas. For them, getting laid off doesn’t just mean leaving the office, it means leaving the country.

“We like the fact that it’s easy to make friends here, we like the fact that the education system is fantastic,” Slaven said. “We enjoy being able to live in a house that for the same price back in the U.K. would be about a third or a quarter of the size.”

Slaven had survived several rounds of layoffs at the oil and gas security company where he worked for seven years. When his bosses called him into their office a few weeks ago, he wasn’t surprised. “I wasn’t in shock then, I could read the situation,” he said.

The same thing had happened to a lot of the friends he met at his local golf club. In just a few months, he saw his entire expat community shrink.

“I actually got to the point where I couldn’t face going to any more going-away parties,” Slaven said. “They were happening with increasing regularity.”

Before getting a pink slip, Slaven was in line to get a green card. He owns a home, his sons play on local soccer teams. His youngest, Niall, who’s 9, has lived here since he was a toddler. “There are only, like, two people that I know in Scotland,” he said.

Slaven and his expat friends used to play golf at the Willow Fork Country Club.

“Every Friday during Lent we had fish and chips, and we had a big crowd that showed up for that,” club manager Richard Rowell said. “You know, if an Englishman tells you the fish and chips are pretty good, you have a thumbs up.”

The exodus of foreign oil workers has hit the club pretty hard in the last few months.

“Eighty to 100 families have relocated to their home country primarily because of job changes and changes in the economy,” Rowell said.

Graeme Slaven has a type of visa called an H-1B. Eighty-five thousand of them are allotted every year to professional workers through quotas to different countries.

Immigration attorney Ken Harder said once a foreign worker is laid off, they have few legal options.

“Much like Capt. Kirk might be beamed up by Scotty, in theory, when an H-1B worker is terminated from employment, he should vaporize and disappear,” Harder said.

Harder’s firm has seen the impact of low oil and gas prices directly.

“I would say since 8 a.m. on January 4th, the first business day this year, we’ve been furiously busy dealing with inquiries both from companies that need to downsize, as well as individuals who have been or are about to be downsized, so it’s been a real profound issue given the local economy here in Houston these last few months,” Harder said.

Slaven has a slim margin of hope. If he can find another employer willing to sponsor him, he can stay — but he knows that’s unlikely.

“The best-case scenario is a miracle,” Slaven said, “that somebody else is interested in employing me. The chances of that at this point in time are slim.”

A quick search on a job board turns up just a few companies willing to sponsor H-1B visas. Most of those companies are in IT, which is not a field Slaven has experience in.

Right now he’s trying to figure out a way to stay in the U.S. until the end of the school year, before he moves his family back to Scotland — a move he’s trying desperately to avoid.