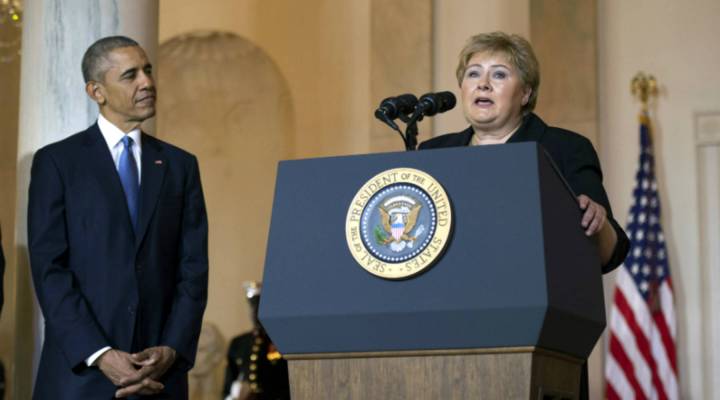 COPY
President Obama listens as Norway Prime Minister Erna Solberg delivers remarks during an an arrival ceremony for Nordic leaders in the Grand Foyer of the White House on Friday. Kevin Dietsch-Pool/Getty Images

President Barack Obama is welcoming the leaders of Denmark, Finland, Iceland, Norway and Sweden to the White House on Friday. The Nordic Summit is expected to touch on many issues, including conflict and the European refugee crisis. The leaders will likely discuss climate change as well.

Though it’s sometimes easy to forget that the U.S. is an Arctic country as well (remember Alaska), that commonality gives some hope that the summit will lead to more concrete steps in achieving climate change deals among the six nations.

“President Obama has just been on this incredible streak of securing new and ambitious bilateral climate change agreements,” said Cathleen Kelly, a senior fellow at the Center for American Progress. “It’s just a great moment for the president to lock in a new ambitious climate deal that will build on his already strong climate change legacy.”

Kelly said with little time left in his presidency, Obama is working to solidify his legacy on climate change.

“Every moment where he’s sitting down with world leaders is a moment to drive more action, and he knows that … we’ve seen that in his other recent bilateral deals,” Kelly said.

Other bilateral agreements on climate protections include deals with China, Argentina and Canada. Both the U.S. and Canada pledged in March to reduce methane emissions from oil and gas by as much as 45 percent from 2012 levels within the next decade. The U.S. has taken a step toward that pledge. Yesterday, the Environmental Protection Agency announced final standards limiting those emissions. It’s the first time such standards have ever been placed on the oil and gas industry.

“The actions we’re announcing today will help combat climate change,” said EPA Administrator Gina McCarthy in a call to reporters on Thursday. “It will reduce air pollution that directly harms public health, and it will make sure that the oil and gas industry can continue to operate safely and responsibly as a vital source of energy for Americans across the country.”

Methane, though emitted at much lower levels, is estimated to be about 25 times more potent than carbon dioxide as a warming greenhouse gas.

Critics of the new standards said the they are too restrictive on the oil and gas industry.

“The Obama administration seems hell-bent on enacting as many anti-energy regulations as possible before the end of the president’s term, and these methane rules are another straw piled onto the camel’s back,” said Isaac Orr, a research fellow at the Heartland Institute, in a written statement.

“This is simply a case of the president taking one last whack at the oil and gas piñata on his way out the door,” he wrote.