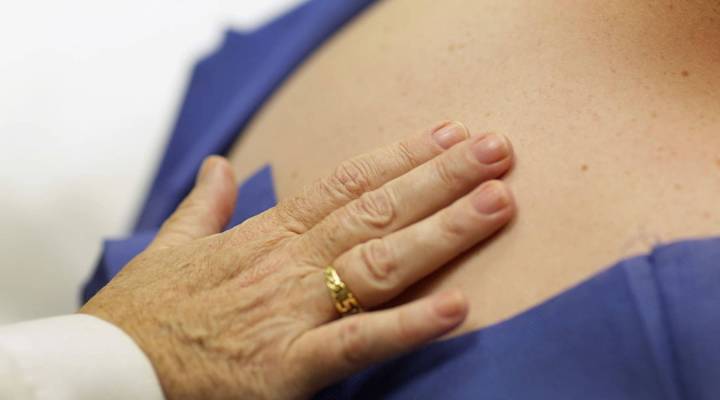 COPY
A silicone-based polymer applied to the skin can help with treatments for a number of medical conditions.  Joe Raedle/Getty Images

A silicone-based polymer applied to the skin can help with treatments for a number of medical conditions.  Joe Raedle/Getty Images
Listen Now

Beauty may be only skin deep and in the eye of the beholder, but it’s also big business.

Roughly 95 percent of Dr. Ruth Tedaldi’s dermatology practice, based in the suburbs of Boston, is cosmetic. Already, patients are reaching out to her after reading about “second skin,” a silicone-based polymer applied to the skin in a thin coating that may help skin appear more youthful, less wrinkled. A recent article in the journal Nature Materials described the results of a 170-person pilot, which then generated media coverage in The New York Times and other publications.

In 2013, Tedaldi sold and helped test an earlier version of second skin, which she said was expensive and hard to apply. “It’s not something that you’re going to put on and look like you’ve had a face lift,” she said. “That’s not what the product is.” The topical, skin-like coating doesn’t remove wrinkles, but rather helps hide them temporarily. “The coach turns back into the pumpkin when you take it off,” she explained.

More promising, she said, is the idea that this second skin could be a delivery system for other treatments, which is where Olivo Labs and Living Proof, the two companies behind this research, are heading.

After refining their earlier product, the companies are moving into clinical trials, testing its ability to deliver drugs to treat different skin diseases. A spokesperson confirmed they will be seeking FDA approval, but declined to discuss details on the trials or their timeline.

“Very common skin diseases, including eczema, psoriasis, acne, vitiligo, are all conditions that could really benefit from a development like this,” said Arlene Ruiz De Luzuriaga, assistant professor in dermatology at the University of Chicago, noting the second skin could serve as a dressing to treat the disease while also helping to minimize the appearance of the condition. “There are a lot of chronic wounds, in my experience, that would be well served by a dressing that fits well, that’s easy to apply,” she said.

Developing something with both cosmetic and medical uses is something of a sweet spot for scientist and researchers.

“Jackpot, I think, is closer to what the potential would be, but a lot more testing needs to be done to see if it’s going to pan out,” said David Polsky, a dermatology professor and researcher at the New York University School of Medicine.