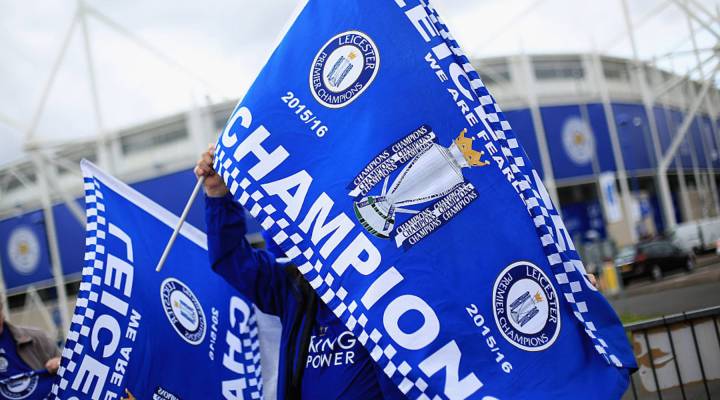 The betting industry is licking its financial wounds.

“In the history of betting, certainly since it was legalized in 1961, a [single event] winner with odds of 5,000-1 has never happened,” said Simon Clare from the betting firm Coral. “Every bookmaker is crying out in pain.”

“That’s a barometer of what Leicester have done and just how amazing this win is,” he added.

“This is the biggest sporting upset of all time. We’ve all got a bit of egg on our face,” she said.

Bookmakers have been cheering Leicester’s success, whilst simultaneously putting their hands in their collective pockets.

“I really enjoyed the first half of the season, the second half just got harder and harder, ” he said.”I would feel sick watching them play.”

But, mulling over their prospects on a camping holiday he found he was encouraged by the team’s performance at the end of the last season, and, taking a shine to the appointment of Claudio Ranieri as manager, he decided to put down the £5 ($7.28) bet at for his team to win.

“I thought, they’re going to do something special this season,” he said.

Bookmakers estimate the industry as a whole will have lost around £20m ($29 million). Yet, they sound almost as exhilarated and excited by Leicester City’s win as the lucky punters and the fans, because although they are facing steep losses as a result, for them it’s a great story.

The bookmakers were much slower than the punters to believe that Leicester could win the title. The problem was not so much the long odds at the start of the season, but the fact that they were so slow to respond to Leicester’s success. At Christmas, when the Foxes had won 10 games in a row, the odds were still quite high, in Coral’s case they were still at 33-1 in December. It wasn’t until Leicester beat Manchester City 3-1 in February that they became favorites to win.

“The bookies were just ignoring their form. The punters started to believe but not the bookies,” said Clare. “We’ve never lost money like this — it’s the biggest hit we’ve ever taken. In a way, it’s a beautiful wake up call. It’s an amazing moment.”

And there is a sound reason they are not downcast at their losses. Next year they’re expecting a great flood of new bets as fans from Burnley to Bournemouth hope that their team will “do a Leicester”.

The odds on a Watford or a West Brom win are slight of course. Leicester’s success was a “perfect storm of the right manager, right players, few injuries, no playing in Europe and the big teams underperforming,” said Dale Tempest from online betting firm Skybet. The company, which sponsors the three divisions below the Premier League, has a particularly large base of Leicester supporters and is therefore one of the companies that stands to lose the most — in the region of £5m ($7.3 million).

Interestingly, the bookmakers seem to think that the chances of Leicester being relegated are greater than them winning again. Tempest said that’s because the stakes have been raised — there will be tempting offers for the top players, the big teams are looking to change managers and they’ll have to play in Europe.

So has it made the industry more cautious?

Ladbrokes said no more 5,000-1 odds for the Premier League, Coral said it will be much more cautious. But Skybet have got 5,000-1 odds for Burnley to win the Premier League, who have just won the Championship and will be promoted next season. Already, 888 people have placed their bets — meaning that if they win Skybet stand to lose £7m ($10.2 million). However, Tempest said the company will be quicker to slash the odds should the team start performing, a sentiment echoed by all the companies.

But William Hill’s Graham Sharpe says this is a numbers game. The chances of Leicester winning were that slim and they would probably do the same again — and the next 4,999 times they’ll be right. He likens it to the jockey Frankie Detorri riding the winning horse in all seven races at Ascot in 1996 — an unheard of feat. He remembers the stunned haze surrounding the bookies and their £40m($58.2 million) loss.
But he said, it was so unlikely, that they all agreed they’d probably do the same again.

“This time we hold our hands up and say well done. But [Claudio] Ranieri, don’t do it again,” he said.

And as for fan Lee Herbert — will he be doing it again?

“This is it for me. I mean… it’s not going to happen again, so why carry on?”