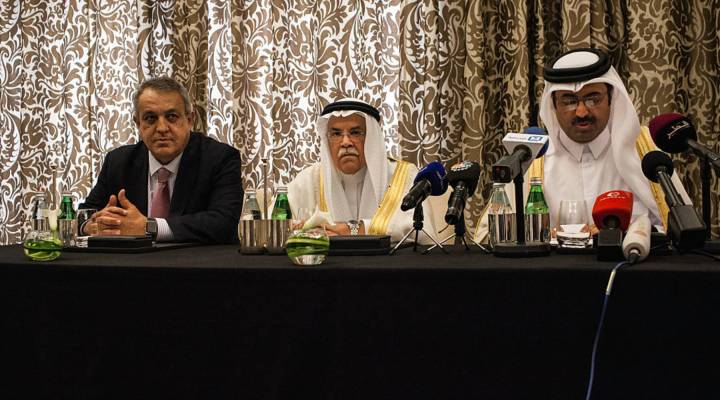 Oil producing countries are still processing the fallout of a failed meeting last weekend. The plan was to freeze production at current levels for many OPEC members, plus non-members including Russia. Today prices actually bounced up. But if key producers keep pumping full bore, supply may continue to outrun demand and keep prices down.

But the fiscal effects of low prices vary by producer. Some have money stored up for times like this, while others teeter on the financial brink. Two countries that pushed hard for a producer freeze last weekend are Venezuela, where there are food shortages, and Russia.

“Below $40 a barrel, President Putin has to make some very unpleasant decisions, like raising taxes on his oil industry,” said consultant Bob McNally of the Rapidan Group and author of the upcoming book “Crude Volatility: The History and the Future of Boom-Bust Oil Prices.” “And if you go into the teens, the Russians need to then think about cutting salaries for soldiers and workers.”

Many historians believe one of the nails in the coffin of the Soviet Union was a prior oil collapse in the late 1980s.

“Their choice will be to hollow out even further their ability to fight ISIS, to stop repairing the electrical grid, and cut the availability of food and fuel for their citizens,” said David Goldwyn of the energy advisory Goldwyn International Strategies.

The list of fiscally fragile petroleum states includes Algeria, Azerbaijan and Libya. What producer countries did during the recent oil price boom was plan their budgets assuming high prices and high revenue. Nigeria and Angola assumed crude would sell for over $80 a barrel.

“Given we live in a less than $40 a barrel environment, they are now seeking to close billion dollar or more budget deficits,” said Africa investment advisor Aubrey Hruby.

If any country can be deemed a winner of what one analysts calls the oil “Hunger Games,” Saudi Arabia has years of savings stored up, as do Kuwait and the United Arab Emirates.