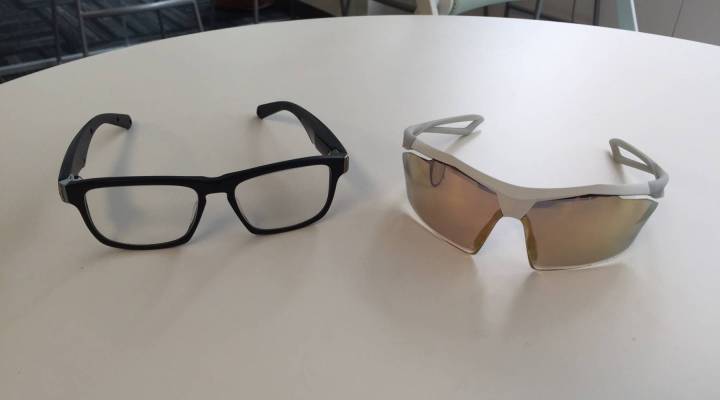 COPY
Project Genesis frames, left, along with a pair of Nike running glasses, both from VSP Global. Stephanie Hughes / Marketplace

The insurer VSP Global announced a partnership this week with the medical tech startup Vizzario. It’s just one example of insurance companies stepping into the world of innovation.

Other projects of VSP’s? Smart glasses called “Project Genesis.” A prototype is set to be released in July. The frames will be able to monitor behaviors and track health metrics.

“The whole concept of tracking a person’s gait and how they’re walking is really important,” said VSP Global CEO  Jim McGrann. He said the glasses could give important feedback, and help monitor the progression of diseases such as multiple sclerosis or Parkinson’s.

In the future, the glasses may also be able to monitor behavior on the job. For example, if a long-haul truck driver started showing signs of exhaustion, the glasses could sound an alarm. “With that device, you can pick up if their head nods down, or if they’re falling asleep for a second,” McGrann said.

McGrann also envisions the glasses being used by coaches to monitor their players’ health, and potentially save them from greater injury.

“They will be able to sense earlier if a player is favoring one leg or the other, and maybe get them out,” McGrann said.

VSP hopes to have the glasses on the market by early 2017.