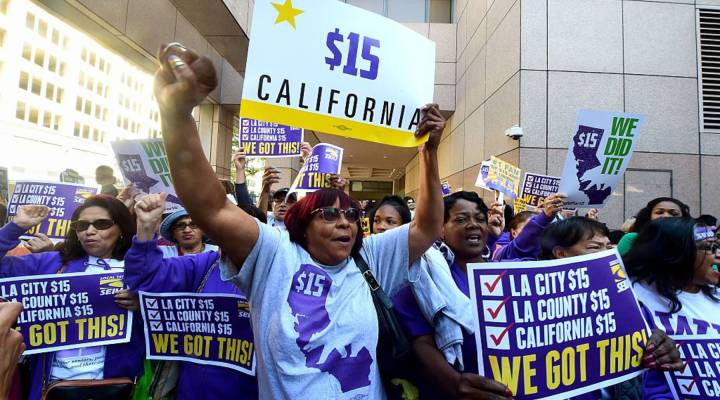 The federal minimum wage has remained $7.25 an hour since 2009, but several states, cities and businesses have moved or are moving to $15 an hour.

You might have seen or read about strikes across the country to raise the minimum wage. As Bloomberg Businessweek’s Josh Eidelson finds, the fight for $15 has taken a lot of time and effort:

“None of that would have been possible without the union-conceived Fight for $15, a four-year-old effort that’s been organized labor’s most effective political campaign in recent memory. ‘On the political level, it’s definitely working,’ says Vincent Vernuccio, who directs labor policy for the Mackinac Center for Public Policy, a Michigan-based free-market think tank. The Fight for $15 was the brainchild of the Service Employees International Union, the second-largest in the U.S., many of whose 1.9 million members work for local or state government or in taxpayer-funded health-care jobs. Since 2012, SEIU has sunk millions of dollars into the Fight for $15 to pressure fast-food corporations to allow unionization, lobby elected officials to pass higher wage laws, and support worker walkouts and mass demonstrations.

SEIU’s president, Mary Kay Henry, is gambling that the Fight for $15 will help save her union.”

Eidelson joins the show to explain more. Click the audio player above to listen to the full interview.